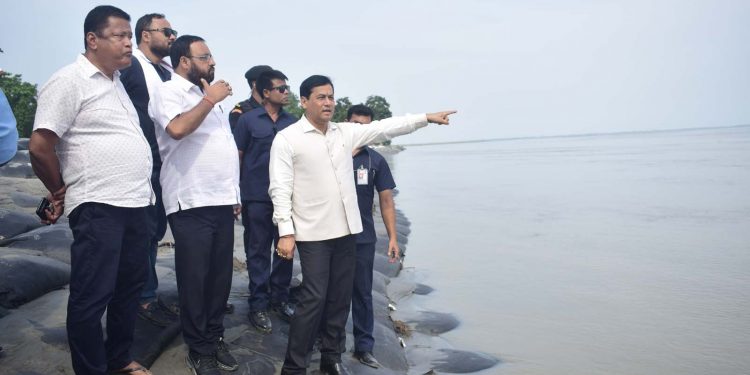 The Assam CM also visited the Number 4 embankment at Opholamukh damaged by this year’s floods and directed the Brahmpautra Board and Water Resource officials to complete the erosion prevention works on war footing.

Talking to newsmen on Friday, the chief minister said fund had been released beforehand this year to all districts for flood management and there had been no scarcity of fund.

Informing about the highland construction by state government at Kaziranga National Park which had provided succour to animals during this year’s flood, Sonowal said that the central government had been extending full cooperation in fighting floods and a permanent solution to the perennial problem would be found with the patronage of central government.

Later, taking part in the flood review meeting with district administration and officials of various departments at the Circuit House, the chief minister said that works under the Rs 240 crore worth of “Protection of Majuli Island from Erosion of River Brahmaputra” scheme implemented by Brahmaputra Board had been substandard and strictly directed the officials of the board to ensure quality of the works.

He also instructed to carry out the repair and strengthening work of vulnerable portions of 114 km of embankments in Majuli without delay and assured swift fund release for the same.

Directing the public works department (PWD) to repair all the roads and bridges damaged by floods, Sonowal issued instruction to health and family welfare department to organise regular health camps at flood affected areas for preventing spread of diseases post flood and for containing diseases such as Japanese Encephalitis.

He also urged the PHE department to ensure clean drinking water to the flood affected people and directed the agriculture department to prepare rice seedlings for distribution among the farmers.

Sonowal also directed the department to correctly assess and submit a report in the right format so that fund for the damages can be released for the flood affected farmers.

He also instructed the veterinary department to hold regular camps for animals and provide cattle feed.

Earlier on Friday, the chief minister visited the household of Runu Kalita at Dakhinpat Kumar Gaon, who was killed by elephants on July 6 and handed over an ex-gratia cheque of Rs 4 lakh to the next of kin of the deceased.

He also handed over cheques to 6 other persons injured by elephants in the village and directed the Majuli Deputy Commissioner to ensure free medical treatment for them.