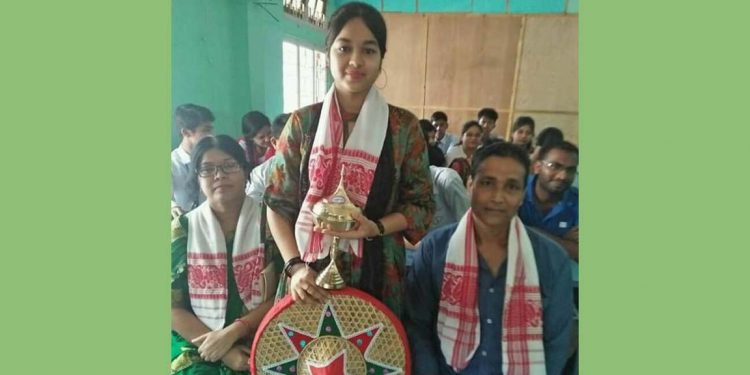 Iffatun Nahar who was felicitated along with her parents at her school KCM Academy in Goalpara. Image credit - Northeast Now

Leaving Afsar, Rezina, Gofur and Emdadur, rest of the students have secured more than 500 marks which will enable them get admission in Assam’s local medical colleges  at Guwahati, Dibrugarh, Silchar, Tezpur and Barpeta district.

The cut-off mark for the medical colleges of Assam is expected to be declared in August by the directorate of medical education for 726 MBBS and 42 BDS (Bachelor of Dental Surgery) seats.

However, as the NTA has already announced its results, the admission process will begin soon in the state.

In 2018, the highest cut-off mark for unreserved category in Gauhati Medical College was 548 marks and the lowest for the same was 537 both in Silchar and Tezpur medical colleges.

The results of the NEET 2019 were declared recently after one month of the examination was held in May. It was conducted by the National Testing Agency (NTA).

As per the NTA, the cut-off marks of NEET 2019 have been increased by 15 marks for each catergory.

NEET cut-off percentile for the general category is 50th percentile, while the corresponding mark has been declared as 701 to 134.