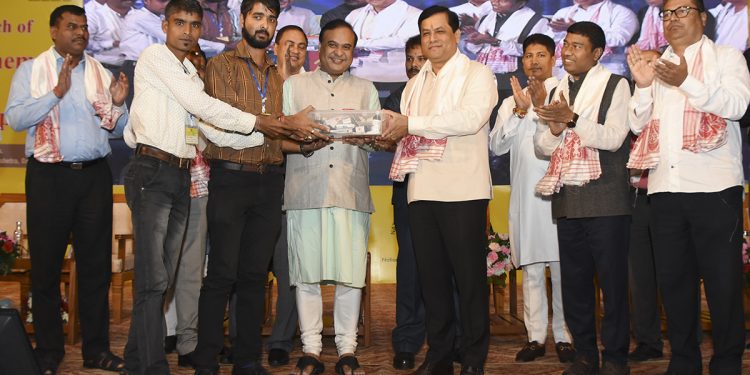 A programme was organized by National Health Mission, Assam and Department of Health and Family Welfare, Government of Assam at Srimanta Sankardev Kalakshetra.

Launching the scheme, the chief minister said most of the tea garden hospitals in the State could not provide medicines to the patients of the tea tribe community.

He said for that purpose, the patients had to bear expenses in procuring medicines.

Schemes like Mobile Medical Unit (MMU) service in 442 tea gardens with 80 MMU vehicles and wage compensation of Rs 12,000 to each pregnant woman of tea garden areas in four installments had been some of the epoch making initiatives of the State Government towards ensuring better health for tea tribe community, he said.

Notably, under the Free Drugs Scheme for Tea Garden Hospitals 142 essential drugs, 47 surgical items, 45 consumables/linens and 6 numbers of disinfectants would be provided free of cost to the 651 tea garden hospitals of the State.

An amount of Rs 20 crore would be spent every year for the scheme.

Reducing the burden of out of pocket expenditure of tea garden population and making quality drugs accessible to them are the main reasons behind the scheme.

Sonowal also highlighted schemes of the State Government like free rice to the tea tribes’ community.

He also said free scholarships and free coaching are being provided for the meritorious students of the community for preparing for civil service along with medical and engineering entrance examinations.

Urging the people from tea tribe community to inspire their children to acquire knowledge through education and excel in all spheres of life, Sonowal stated that government could provide only infrastructure but the community members must come forward to take advantage of the infrastructural development to shape their lives.

“Tea tribe community has tremendous potential for growth and they must acquire skills and knowledge to establish themselves as able citizens and make Assam one of the top states in the country,” the chief minister said.

He also spoke about the necessity to bring back the glory of Assam tea in the world market by maintaining tea quality.

Speaking on the occasion, minister for health and family welfare Dr Himanta Biswa Sarma said that it was wrong to blame the whole tea tribe community after the Teok Tea Garden incident.

He emphasized on setting up more educational institutes like schools and colleges in the tea garden areas for spreading education and awareness.

He also stressed on the need to employ more doctors in tea garden hospitals to adequately handle patient loads.

Saying that the tea industry had been going through a lean phase in the last few years, Sarma asserted that State Government would take all necessary measures to revive this industry which had been providing livelihoods to a large section of the population.

In the programme, several doctors working in tea garden hospitals were also felicitated with an amount of Rs 25,000 for their dedicated services along with awarding best ASHA workers.