The train which started its journey at 9.45 am from Tinsukia reached Rangapara North Railway Junction at 6 pm crossing the Bogibeel Bridge 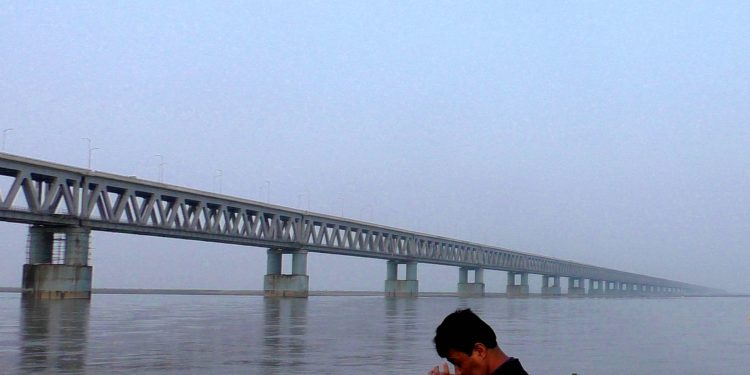 A boggy open small type (BOST) train with 45 wagons crossed the Bogibeel Bridge on Saturday ahead of the inauguration of the bridge.

According to Northeast Frontier Railway (NFR) sources, the train which started its journey at 9.45 am from Tinsukia via Dhamal Gaon in Dibrugarh on the south bank of the Brahmaputra and successfully reached Tengani Railway Station near Bogibeel on the north bank of the river.

Also read: Train runs on trial over Bogibeel bridge; likely to be commissioned by year-end

Earlier, on October 22, 2018, a rail engine with 15 coaches crossed the Bogibeel Bridge during inspection by the team of Commission of Railway Safety (CRS).

The safety team inspected the entire route from Dhamal Gaon Railway Station on Dibrugarh side to Tangani Railway Station on the Dhemaji side by the running rail engine with the coaches on October 22. Railway officials said, the train speed was between 120 km and 140 km per hour.

Talking to ‘Northeast Now’, a railway official earlier told that before the inauguration the bridge, it is important to run the train on trail basis.

It may be mentioned that on October 3 last, the first speed test with a rail engine from Dhamal Gaon Railway Station to the southern approach of the Bogibeel was carried out. A track machine was run on the bridge on September 20 last to complete some of the track work.

The Bogibeel Bridge over the Brahmaputra, spanning 4.94 km, is going to be the longest rail-cum-road bridge in India.

The bridge will connect the twin districts of Dibrugarh and Dhemaji.

The Bogibeel Bridge is likely to be commissioned by the end of this year.