road network, railway and airway connectivity has been improved in the northeastern region during Narendra Modi’s regime: Pradan Baruah 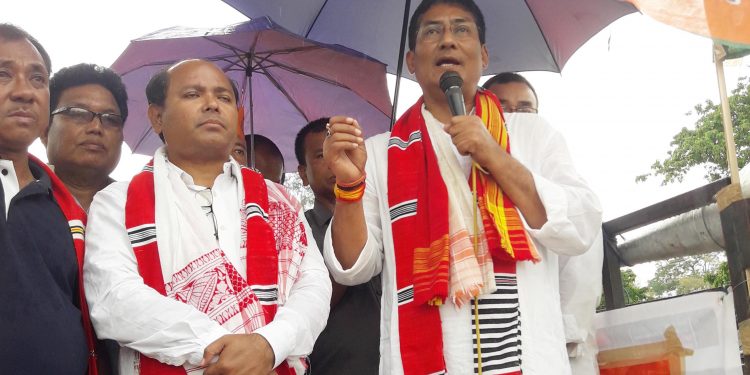 Addressing a huge gathering at Jonai bazaar on Monday, MP Baruah said Nraendra Modi-led BJP government in the Centre has taken a number of schemes for promotion of the living standard of the rural people of the country and paying due honour to the rural farmers.

Speaking about some major initiatives taken up by the BJP-led NDA government, Baruah said the central government has set up country’s second Agriculture Research Centre at Gogamukh in Dhemaji district and country’s second sports university to come up at Chabua in Dibrugarh district.

He said road network, railway and airway connectivity has been improved in the northeastern region during Narendra Modi’s regime while the region has witnessed a new trend of infrastructure development during BJP rule.

“The scheme targets 12 crore rural farmers of the country while about 1.36 crore farmers have received the benefit so far. The Centre has earmarked Rs 74,000 crore for the scheme,” he informed.

Baruah further said the BJP government in the state, following the economic reform policy of the central government, has increased fund allocation in the state budget thereby earning large chunk of revenue to state exchequer every year.

Taking instance of earlier state budget, MP Baruah said the state’s overall budget of Rs 3,000 crore during 1996 has been increased to 1 lakh crore this year. As such, the earlier state’s PWD budget worth Rs 18 crore to Rs 20 crore has been enhanced to Rs 15,000 crore.

“People of the state have lost confidence over the Congress party because of its failure in all fronts during the 15 years’ rule in Assam,” said Baruah.

He appealed to the citizens for renew their mandate towards the BJP and give another chance to rule.

Speaking the occasion, Jonai MLA Bhuban Pegu said the BJP government in the state has achieved remarkable development in Dhemaji district during the last five years which was not done by earlier Congress government.

Pegu, who is a Sanmilita Gana Sakti (SGS) MLA, representing Jonai constituency, said developmental process in his constituency has been accelerated during BJP rule and it has become possible due to the cordial relations among the elected leaders of the allied groups.