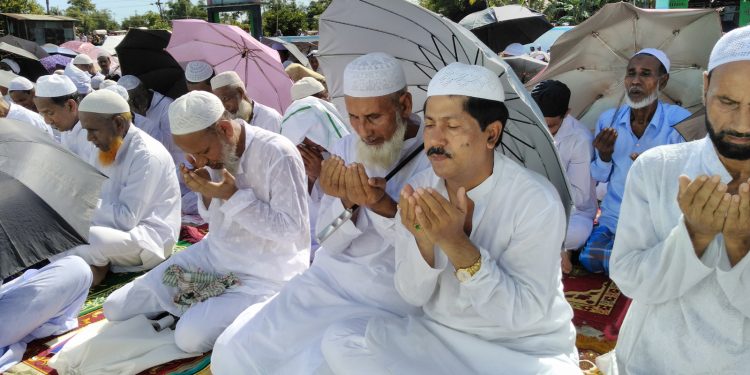 Dy Speaker of Assam, Aminul Haque Laskar, offering namaz on the holy occasion of Id-ul-Azha in Berenga, on the outskirts of Silchar, on Monday. Image: Northeast Now

Assam Assembly Deputy Speaker Amiunul Haque Laskar on the sidelines of Id-ul-Adza, said, “Article 370 and Article 35 (A) were only for the interest of the Kashmiri Muslims and not for the Muslims of rest of India.”

After offering his namaz at Berenga Eidgah, on the outskirts of Silchar, on Monday, speaking to Northeast Now, Laskar, said, “Article 370 and Article 35 (A) were a historic blunder.”

“I believe it was a ‘curse’ for India in the long run. The identity of Muslims in India cannot be judged from that of Kashmiri Muslims,” he added.

“Even after more than 70 years of our Independence, ‘peace’ could not prevail in Kashmir,” he added.

“Apart from Kashmiri Muslims, 90 per cent of our brethren stay in other states of India,” Laskar said.

“Any Act, which encompasses for the betterment of our Muslim community in India, should be embraced and not draconian laws like 370 and 35A,” he further added.

The Deputy Speaker, further added, “The steps taken by our central leadership would bring back peace in Kashmir.”

“Just like all communities are living peacefully in Assam, Kashmir too would have a similar effect soon,” he further added.

“Only a handful of them are trying to dislodge this effort, even Pakistan, which is trying to poke its nose in our internal affairs. I strongly condemn their actions and their nefarious role,” Laskar said.