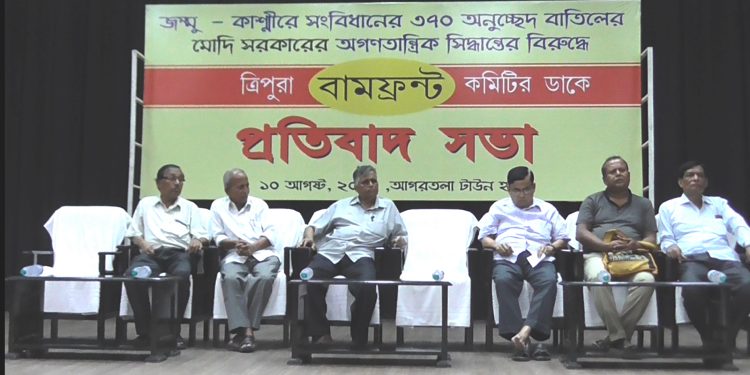 Left leaders in Tripura taking part in a protest demonstration in the state. Image: Northeast Now

The Left parties on Saturday staged a protest demonstration in Agartala, slamming the Modi government for scrapping Article 370 from Jammu & Kashmir.

They demanded that for the restoration of the earlier status of the state.

The Left leaders also expressed their solidarity towards the people of Jammu and Kashmir.

Coming down heavily on Modi government, Tripura Left Front convener Bijan Dhar said that under Modi’s rule, people are losing their jobs and farmers are committing suicide due to heavy loan.

“Prices of commodities and people’s sufferings are increasing every day,” Dhar further said.

He also said that the present government at the Centre wants to divert the people’s attention from main issues to other problems.

Slamming the government further, Dhar questioned, “If the government wants the betterment of J&K, then why has it banned mobile and internet services in the state?”

He further said that by destroying Jammu and Kashmir, the government has destroyed democracy.

“Moreover, there is a threat that the country is going to be under a fascist regime,” Dhar alleged.

“To fulfil its dream of converting India to a Hindu nation, the BJP has revoked Article 370 and 35 (A) in Jammu Kashmir,” alleged CPI(M) state secretary Goutam Das.

He further said that the Central government has dismantled the federal principle of the Constitution of India.