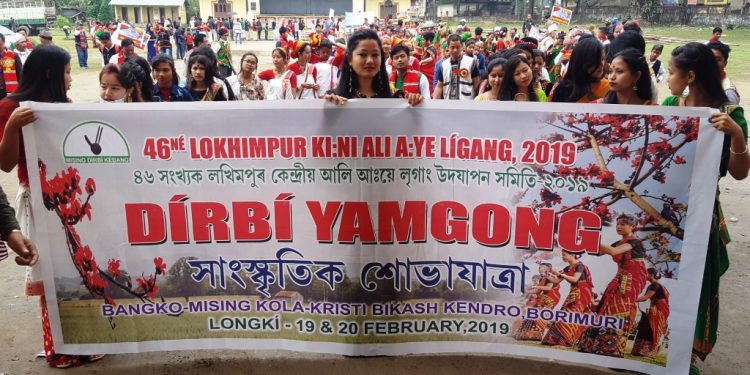 The festival of commencement of the agrarian season of the Mising community, Ali Aye Ligang was celebrated on Wednesday across Lakhimpur district of Assam with traditional fervour, pomp and ceremony.

The 46th central Ali Aye Ligang festival was celebrated with a two-day-long programme at the Banko-Mising-Kola-Kristi Bikas Kendra at Borimuri of North Lakhimpur.

The Mising community of Assam has been celebrating this festival on the first Wednesday of the month of Phagun by sowing sacred seeds in the name of deities like Donyi Polo, Karshing Kartan, Se: Di-Me:Lo and Rugzi-Me:Rang.

Organized by North Lakhimpur Mising Banke Drirbri Kbang the festivities began with cleansing rituals and hoisting of the flag by Dhanprabha Tao, president of the organizing committee.

This was followed by tribute paying ceremony led by Kiran Ayengiya, the working president of the organizing committee. The door of the Murang Ghar was inaugurated by Narendranath Pawo, project director, DRDA, Lakhimpur and the ceremonial Lriggad was conducted by Bhumiranjan Doley and Kamalakanti Doley.

A colourful cultural procession showcasing the rich heritage of the Mising community was taken out on this occasion on Wednesday in North Lakhimpur. The procession started from Tyagkshetra and ended at Borimuri before crossing the main streets of North Lakhimpur town.

Later the opening session of the Central Ali Aye Ligang was inaugurated by Ekalabya Gam, chief adiviser, Mising Dirbow Kbang, where the souvenir was released by Gobinda Taid, president of Mising Agom Kbang.

Cultural competitions like Gumrag, Oyi:nitom were organized on that occasion. Earlier drawing and essay competition for young children and baby show were also organized on Tuesday at the Ali Aye: Ligang venue in Borimuri.