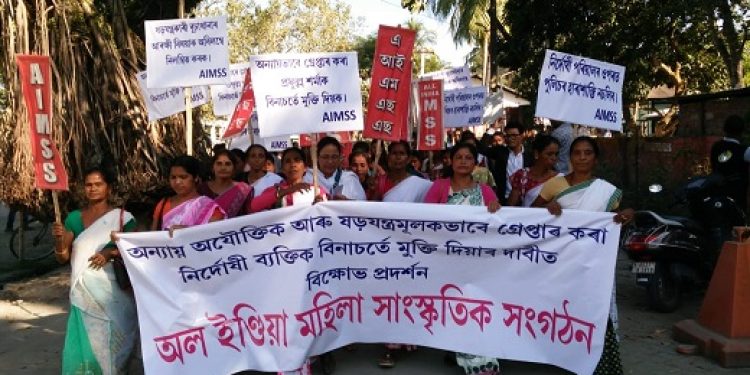 The Udalguri chapter of All India Mahila Sanskritik Sanghatan (AIMSS) taking out a protest rally at Tangla town in Udalguri district on Thursday. Image - Northeast Now

In a bizarre incident, a father has been arrested for the love affair maintained by his son in Hatibandha village under Tangla Police Station in Udalguri district.

According to reports, the person, identified as 55-year-old Prafulla Sarma, whose son 23-year-old Jyotish Sarma eloped with 19-year-old Pinki Devi, daughter of Keshab Sarma, a native of Byaspara under Sipajahar PS in Darrang district on October 31 last.

The Sipajhar Police picked the father and mother of Jyotish on November 26 and produced the father in Darrang court levelling kidnapping charges and he was sent by the court to judicial custody on November 27.

The incident has evoked public outrage in the Tangla town.

The Udalguri chapter of the All India Mahila Sanskritik Sanghatan (AIMSS), the women’s wing of the Socialist Unity Centre of India (Communist) took out a protest rally throughout Tangla town on Thursday holding placards and raising high-pitched slogans against police in front of Tangla PS demanding unconditional release of Prafulla Sarma.

The activists of the AIMSS alleged that the couple after elopement came to Hatibandha village at the boy’s place on October 31 following which the girl’s father Keshab Sarma and her maternal uncle Dev Sarma visited the residence of the youth.

The village head also arranged for a meeting of the villagers in presence of both the parents and the couple where the girl refused to go with her parents.

The infuriated maternal uncle allegedly also beat up his nephew and the couple later managed to flee from the scene.

The AIMSS strongly condemned the police for charging Prafulla Sarma with a mailicious case of kidnapping.

The activists demanding unconditional release of Prafulla Sarma along with 4 charter point of demands submitted a memorandum to Deputy Commissioner, Udalguri through the Harisinga Circle Office.