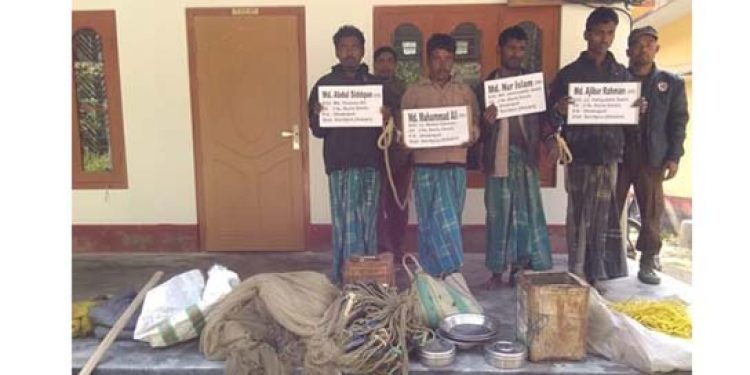 The fishermen who were arrested for illegal fishing in Orang National Park. Image - Northeast Now

Four fishermen have been arrested for illegal fishing in Orang National Park.

The incident occurred on Wednesday near Gorabhanga Forest camp in the southern most part of the Orang National Park, bordering Sonitpur district.

The accused fishermen have been identified as Nur Islam, Ajijur Rahman, Abdul Siddik and Mohammad Ali.

All the accused belong to No 2 Bosa-Simalu village under Dhekiajuli Police Station in Sonitpur district.

“A country boat, few nets and several fish which they had caught, have been seized from the possession of the fishermen,” informed official sources.

Later they are remanded to judicial custody.

It may be mentioned that the forest protection force personnel in the Orang National Park and Tiger Reserve Project apprehended one person in connection with illegal catching of a rare variety of ornamental fish within the territory of the Park in the Bogoribari boundary in the last week of August this year.

Informing about the incident, Chakrapani Rai, range officer of Orang National Park, had said, a resident of the adjacent Bogoribari village, identified as Jiabur Rahman, illegally entered into the park to catch a rare species of an ornamental fish called ‘Channan Barca’, which is locally known as ‘Barca Cheng’.

The accused was nabbed along with a ‘Barca Cheng’ fish, weighing around one kilogram.

Accused Jiabur, during the interrogation, had revealed before the forest personnel that such fish variety has a huge demand as an aquarium fish in the market and they get an amount of nearly Rs 10,000 for each of such fish weighing just around one hundred gram.