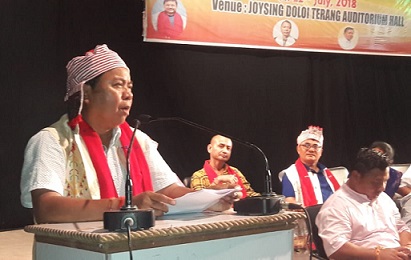 With the Lok Sabha election knocking at the door, opposition Autonomous State Demand Committee (ASDC) in Karbi Anglong has intensified its attack on the ruling BJP.

In a press communique, ASDC has targeted Assam Cabinet Minister for HAD, Mines & Minerals, Sum Ronghang and his son alleging that both the father-son duo is involved in corruption a PHE scheme was left incomplete by Sum Ronghang during his tenure as an Executive Member (EM) of Karbi Anglong Autonomous Council (KAAC) when he was in the Congress party.

ASDC said that it has asked the authority concerned to complete the Augmentation of Greater Diphu W/S Scheme NLCPR (2008-09) but it has not been completed till date. Earlier, the ASDC alleged that Rs. 8 crore, a part of the fund, released for the said scheme was siphoned off by Sum Ronghang and his cohorts.

The scheme remains incomplete despite a ‘Public Interest Litigation’ filed in Gauhati High Court as per a case No. PIL 75/2014, Category 10194. The court directed all the respondents to restart/revive the scheme without any delay and complete the project not beyond 6 months as per order serial No. 311065, dated April 22, 2015, but no step has been taken in this regard.

ASDC has demanded the Karbi Anglong Autonomous Council to complete the scheme immediately in the interest of the citizens of Diphu town.