The forum urged the university administration to allow re-entry of research scholars into the campus, access to library, labs and hostel accommodation.

The memorandum submitted by the RGURSF said that since the declaration of country-wide closure of universities and colleges in March, continuity in many research works have been disrupted. 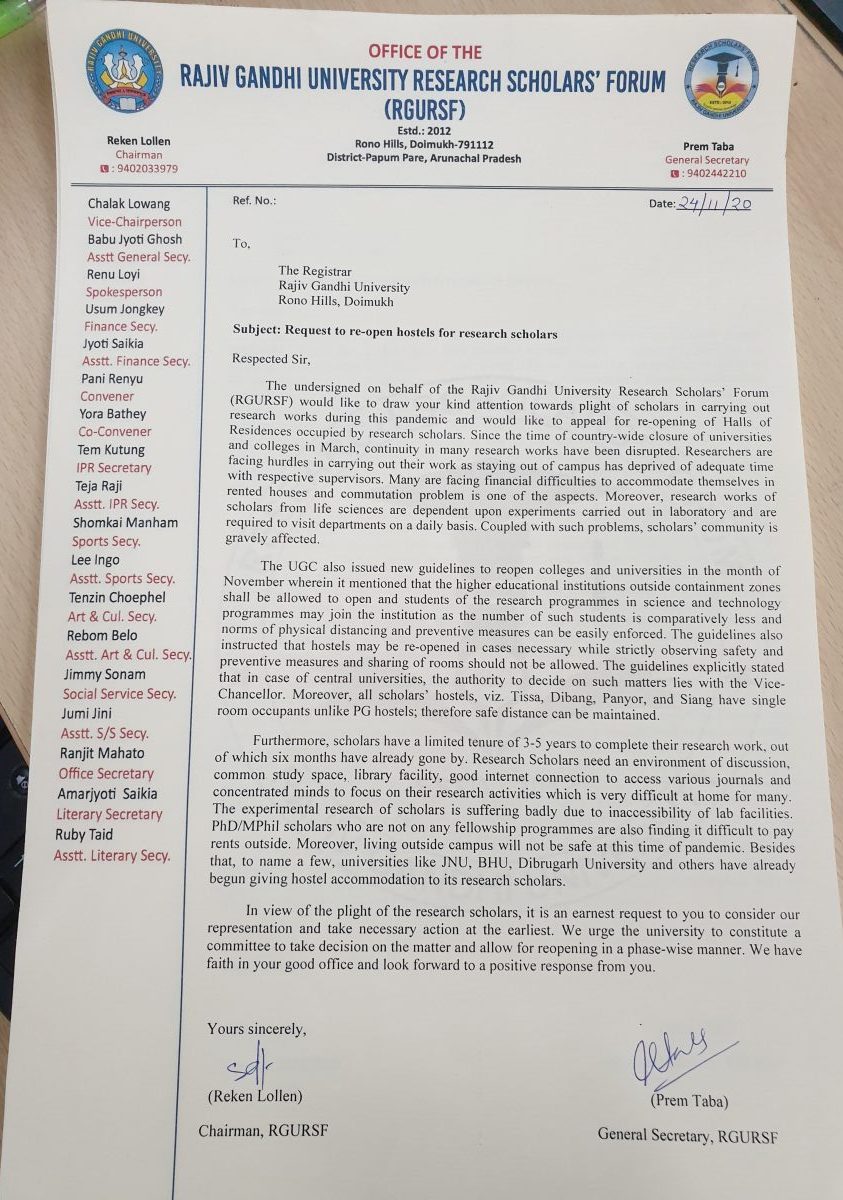 “Researchers are facing hurdles in carrying out their work as staying out of campus has deprived them of adequate time with respective supervisors,” Prem Taba, general secretary of RGURSF, said.

Many are facing financial difficulties to accommodate themselves in rented houses and the commutation problem is one of the aspects, Taba said.

“Research works of scholars from life sciences are dependent upon experiments carried out in the laboratory and are required to visit departments on a daily basis. Coupled with such problems, scholars’ community is gravely affected,” Taba said.

He said scholars have a limited tenure of 3-5 years to complete their research work, out of which six months have already passed due to the lockdown.

Moreover, research scholars need an environment of discussion, common study space, library facility, good internet connection to access various journals, and concentrated minds to focus on their research activities which is very difficult at home for many.

“The experimental research of scholars is suffering badly due to the inaccessibility of lab facilities. PhD/MPhil scholars who are not on any fellowship programs are also finding it difficult to pay rents outside,” Taba said.

He added that universities like JNU, DU, BHU, Dibrugarh University and others have already begun giving hostel accommodation to its research scholars.

Taba emphasised on the new guidelines issued by the UGC on reopening of colleges and universities wherein it mentioned that the higher educational institutions outside containment zones shall be allowed to open.

The UGC guidelines said students of the research programs in science and technology programmes may join the institution as the number of such students is comparatively less and norms of physical distancing and preventive measures can be easily enforced.

It was also instructed that hostels may be re-opened in cases necessary while strictly observing safety and preventive measures and sharing of rooms should not be allowed.

“The guidelines explicitly stated that in the case of central universities, the authority to decide on such matters lies with the Vice-Chancellor. Moreover, all scholars’ hostels – Tissa, Dibang, Panyor and Siang – have single room occupants unlike PG hostels. Therefore, safe distance can be maintained,” Taba said.

In view of the plight of the research scholars, Taba urged the university to constitute a committee to take a decision on the matter and allow for reopening in a phase-wise manner.

Dr Rikam assured that the matter will be looked into and taken up during the November 25 meeting with the deans of all faculties. RGU may consider allowing phase-wise entry of students, he said.