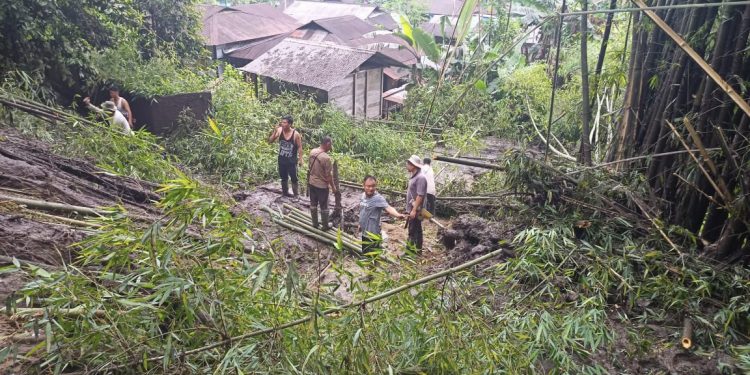 Incessant rain in the last couple of days has created a flood-like situation in several places of Tuting area in Upper Siang district of Arunachal Pradesh triggering landslides, disrupting the surface communication and causing loss of properties.

Pema Lapchi, the zila parishad member of Gelling-Singa said all the drains and rivers of the Tuting area have been flooded with rainwater because of continuous downpour.

Landslides have been reported at Pekong village where the house of a local was badly damaged on June 17. More flooding and landslides threaten the village, he added.

Lapchi and his Tuting zila parishad member Taching Dugong along with officials from different government departments inspected the flood and landslide-hit areas and sent the damage assessment report to the Arunachal Pradesh government.

There was no report of any casualty.

Both the zila parishad members assured to take up the matter with state health minister and Tuting-Yingkiong MLA Alo Libang for necessary assistance to the victims.

They urged the state water resources department to take up flood protection measures for Pekong urgently.

Ledup Dorjee, the former ASM of Tuting and 10 others also submitted a memorandum to the Tuting additional deputy commissioner for taking up flood protection works in the vulnerable villages.

Nima Sangey, a senior leader of the Tuting area urged the state government to provide immediate relief to the flood-affected people.