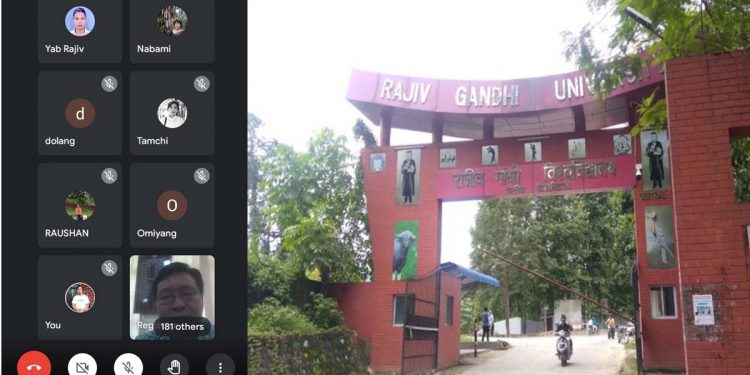 The Rajiv Gandhi University Research Scholars’ Forum (RGURSF) has taken strong exception to the remarks made by RGU Vice Chancellor, Prof Saket Kushwaha during an online interactive session (samvaad) with the scholars and officers of the university on Saturday.

The forum alleged that the Vice Chancellor during the interactive session verbally abused several research scholars and questioned their integrity.

The research scholars’ body also alleged the VC even intimidated them with threats of vigilance actions and issued veiled threats to use ‘other tactics’ to silence those, who hold critical views against the university administration.

“Such language, tenor and tone from a Vice Chancellor to its research scholars is unprecedented in the annals of Indian constitutional and reputed academic institution like RGU,” the research scholars’ forum said in a statement on Saturday.

The forum has described the Vice Chancellor’s remarks in the ‘samvaad’ as “intemperate, vituperative, abusive and intimidating and intentionally taunt upon the research scholars in the cheapest way possible”.

“The post of Vice Chancellor requires the occupant to ‘rise above petty, undignified, inappropriate thinking, language and behaviour.’ The kind of language used in the session does not behove well for a person who holds a public office, where he is meant to serve, not to dictate and act autocratically,” the RGURSF said. 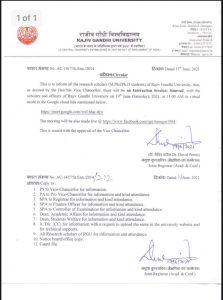 “The VC is so intolerant that he removes those participants from the meeting, who ask critical questions and raise genuine issues. It was not a meeting, but an all-out virtual assault on scholars,” the forum said.

Stating that the samvaad was arranged to insult the research scholars for unwarranted and unfounded reasons, the RGURSF said.

The VC was “acting hyper, shouting and rude without any intimidation. Instead of clearing doubts, his each and every comment was against us and they were filled with rage and negativity,” the forum continued.

Stating that during this trying time of pandemic, they all are stressed and under mental pressure, the forum said “instead of motivating and encouraging us, the VC was all guns blazing, insulting us, swearing upon us and discouraging us in the most unpleasant way possible. It was a ranting session, not an interactive session”.

A scholar on condition of anonymity, while sharing her experience from the session said, “When I received the information about the virtual interaction programme, I was very glad. We all thought finally we will be able to place our grievances and clear our doubts one on one.”

“The interaction programme started well, but when the Registrar in his address said we must write only positive things about the University on social media, I was surprised. And the Pro-VC also despite knowing the current lockdown situation was constantly emphasising finishing the thesis on time, which was very discouraging.”

“Later when it was time for research scholars to submit our doubts, that too on comment section (not verbally), we raised our doubts regarding new course work syllabus, library books and timings, fellowship, etc., and the VC did not let Pro-VC or others explain and kept interrupting, with a loud voice and rude tone, for no apparent reasons as all questions raised were genuine and in the most decent manner,” the scholar said.

“We are very disappointed with VC sir’s behaviour.”

“We all thought that this interaction programme would be a turning point, a chance to bridge the gap between research scholars and the administration but at the end of the programme, we realised it was just for ranting the frustration on us and to warn us of severe consequences if we do not follow them,” she added.

Another scholar took to Twitter and wrote: “Need someone else to head RGU. Preferably someone with a cool head and healthy mentality. No doubt the present VC has developed various facets of RGU in many ways but this session has opened up many questions.”

The RGURSF said it would write to the President of India, Chancellor, Union education minister and the Arunachal Pradesh Governor in this matter.