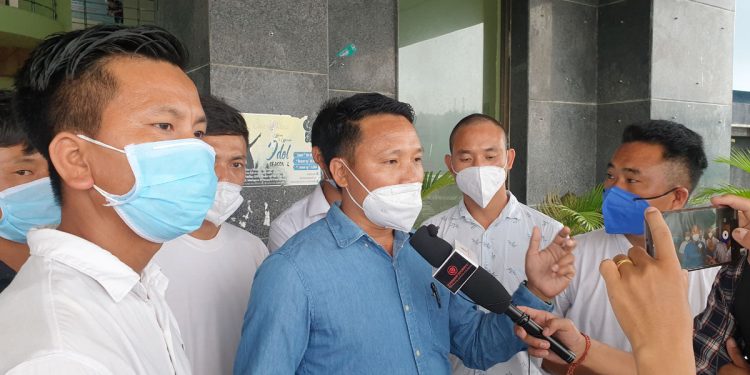 Members of AEKDSU in Itanagar on Tuesday

The All East Kameng District Students’ Union (AEKDSU) of Arunachal Pradesh on Tuesday demanded the early completion of the 81 km road from Seppa to Chayangtajo.

The construction of the road that began in 2008, is yet to be completed.

AEKDSU along with the All Arunachal Pradesh Students’ Union also submitted a memorandum stating their demands before state chief minister Pema Khandu at Itanagar.

The students’ organizations also served the state government with a 14-day ultimatum to meet their demands or they will launch a series of democratic movements.

“The state government should transfer all public works department officials, engineers and other officials associated with the Seppa-ChayangTajo road. They are creating problems in the investigations into the misappropriation of funds meant for the road by Gammon India,” said AEKDSU president Chakang Yangda.

“We believe that if new appointments are made, the case would progress with speed and efficiency,” he said.

The case is being investigated by the Special Investigation Cell (Vigilance).

Yangda while informing that the chief minister’s offuice has verbally assured to fulfill all their demands, said that the ultimatum still stands until their demands are met in letter and spirit.

AEKDSU also demanded the appointment of a permanent SIC investigating officer dedicated to the case.

“Three investigation offices have been changed in the past few months and we think the higher authorities are trying to manipulate the case,” said a member of AEKDSU.

The Union called upon the chief minister to deal with deep-rooted corruption like misappropriation of public funds meant for the Seppa-ChayangTajo in a stringent manner.