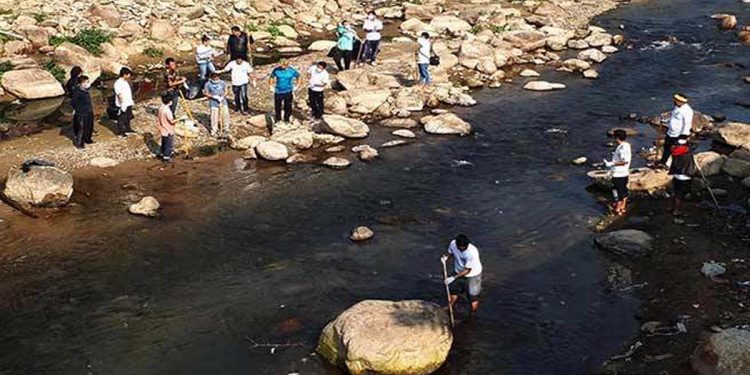 The Youth Mission for Clean River has expressed concern over the depleting natural streams and river pollution in the capital complex region in particular and the state as a whole.

YMCR chairman SD Loda requested the Arunachal Pradesh chief secretary to constitute a committee to collect the status of the natural streams and rivers across the capital city and take appropriate steps.

Loda in the memorandum stated that to beat the increasing river pollution and save the depleting streams, the forum is spearheading a state-wide public awareness campaign across the state.

The theme of the campaign is – “Clean River Mission”.

Lamenting the government’s apathy towards the burning issue, Loda said he has written several letters to the Arunachal Pradesh government in this regard which has gone unheard to date.

“The most unfortunate part is that neither the government nor any of its machinery is joining with us in this mission to save our lifelines,” he added.

“The government is well aware of the dumping of muck into the streams due to rampant earth-cutting  and unplanned  human settlement  near the natural streams, which  is one of the important factors for depleting natural streams and the river pollution, however, no action or plan has been taken yet.”

The river activist also informed that the National Green Tribunal in its various judgments directed the Arunachal Pradesh government to take appropriate steps for the preservation of natural streams and to keep the river free from pollution.

It also directed the various state governments to set up a sewage treatment plant and connecting all the drains to STP in order to prevent direct sewage disposal into the natural rivers and streams.

The NGT had many a time expressed its dissatisfaction over the failure of the government for the protection of the natural streams.

“The carelessness attitude of the state government in the past and the present is the factors responsible for the depleted natural streams and river pollution,” Loda said.

He stated that rivers Senki, Pachin and Dikrong are the lifeline of the denizens of the Capital city, but these rivers are now highly polluted.

These rivers have also become unfit for human consumption and the polluted water of the rivers is posing the biggest threat to the aquatic life, said Loda.

He also claimed that the volume of these rivers is also decreasing day by day.

The Yagamso stream, which passes through the heart of Itanagar, is the main sewage carrier which contributes 50 percent in polluting the Senki river, Loda said.

He also informed in the memorandum that the Lagun river, which passes through Naharlagun, is also highly polluted and on verge of depletion due to direct disposal of the toilet and household waste.