Our state is rich in floral and faunal diversity with more than 120 tribes with different dialects, cultures, attires and food habits: Mama Natung

Chalo Loku, one of the most important festivals of Nocte tribe of Arunachal Pradesh, being celebrated at Deomali on Monday. Image credit – Northeast Now

Chalo Loku, one of the most important festivals of Nocte tribe of Arunachal Pradesh, was celebrated with great enthusiasm and passion at the general ground in Deomali on Monday.

“It makes us proud that the Nocte people have been maintaining their tradition but it needs to be passed o to the youth who can carry forward the rich cultural heritage of the tribal society of the state,” he said.

“Our state is rich in floral and faunal diversity with more than 120 tribes with different dialects, cultures, attires and food habits.”

“We need to protect and preserve them so that that tradition and culture of different tribes of the State are maintained and our identity is intact,” Natung said while advising the youth to stay away from drugs and focus on creative pursuits.

The minister pointed out that the Centre has been insisting on the development of games, sports and youth affairs.

“Three sports academies have been approved for state, one for Tirap, Changlang and Longding areas.”

He also appealed to the youth to take to sports and join the Fit India movement launched by Prime Minister Narendra Modi.

Natung assured of taking up schemes for the area which include the construction of a football ground and other sporting activities at circle level. 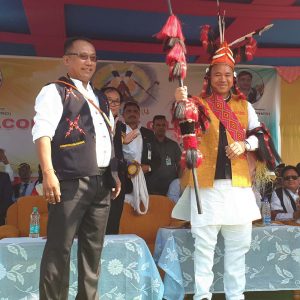 Guest of honour and Pakke Kessang MLA Biyuram Waghe lauded the Nocte people for upholding the tradition and emphasised on continuing to uphold the traditional and cultural identity.

He also urged all to protect wildlife, especially the hornbill which is a symbol of the tribal society.

Waghe called for a united approach in celebration of all festival in a pan-Arunachal way for living together and with love, brotherhood and also, maintain communal harmony in peace and tranquillity.

PHED & water supply minister and local representative Wangki Lowang said, “Our tradition is our culture and our culture is our identity. We need a united approach for the protection of tradition and culture.”

He said Chalo Loku is celebrated after harvest where the locals get the time and enjoy for a good harvest next year.

“The people of all sections of Nocte tribe leaving all differences and enmity enjoy together with songs and dances, we eat and drink together and enjoy and wish that the coming years remain a happy one for all and pray for the well-being of humanity,” he added.

Festival committee president Lapchang Aboh addressed the gathering among others who included ADC Deomali, senior officers from the civil administration and defence and HoDs of the area.