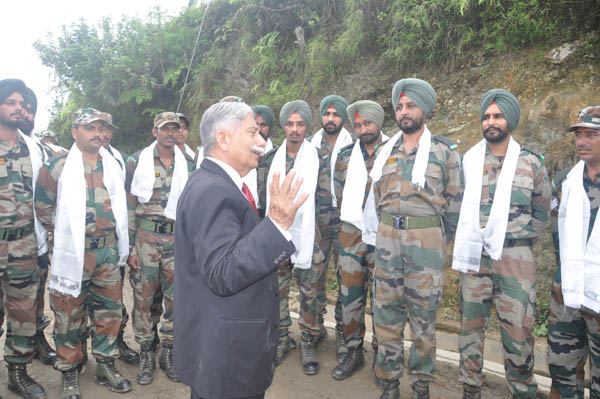 Accompanied by the First Lady of the State  Neelam Misra, the Governor interacted with the combat personnel of Indo Tibetan Border Police and Indian Army.

The Governor lauded them for defending the territorial integrity of the Nation in the difficult and harsh terrain. He said that the people of Arunachal Pradesh are proud of them and admire the discipline and cooperation of the Indian armed forces.

The Governor also advised them to keep up their high morale and continue their excellent standard of discipline, goodwill projects to reinforce their excellent relationship with local people.

In his tour to the farthest administrative Circle, the Governor visited Sape Village, the forward most Field Firing Range of Indian Army and interacted with the villagers. He advised them to join hands with the forces in strengthening our National Border as born sentinels of the Nation.

The Governor, who was earlier briefed about the Sarli Firing Range by the Army officers, also highlighted the importance of the Firing Range for keeping the war worthiness of the troops and the security of the nation to the local population,.

On his maiden visit to the remote Sarli Circle, which is a first visit by any Governor, he was accorded a warm traditional reception by the Local MLA, Pani Taram. Taram briefed the Governor about the challenges of the people of the remote area, particularly road communication.

Sharing his observations about agriculture in different parts of the State, the Governor advised the villagers to go for cash crops and experiment new crops to enhance their income. He asked the local MLA  Pani Taram and Deputy Commissioner  Kanki Darang, who were present on the occasion, to facilitate the villagers for soil testing for different types of crops and horticultural produce.

The Governor assured the citizens of Sarli and Sappe to post a doctor from ITBP at Sarli for the villagers. He also assured them to explore for a good school in the area.

As token of appreciation, the Governor presented ‘Team Arunachal Pradesh’ libel pins to the Gaon Burahs and Gaon Burhis present during the public meeting.