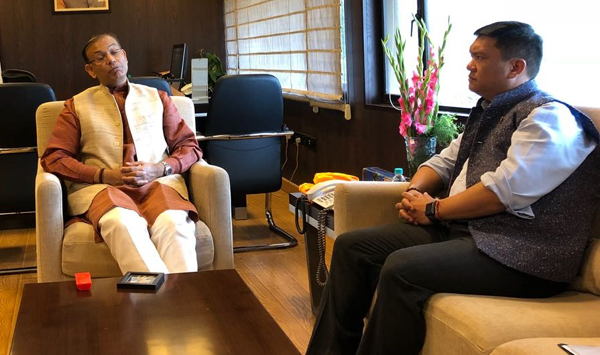 Union Minister of State for Civil Aviation, Jayant Sinha has assured Chief Minister Pema Khandu that the construction of a Greenfield Airport at Hollongi near here would be taken up on topmost priority by his Ministry.

The assurance from Sinha came on Monday when Khandu called on the former at his office in the national capital.

While urging for early sanction of the Green Field Airport, Khandu in a meeting with the Union MoS informed that the Arunachal Pradesh State government has finally resolved all the outstanding issues relating to establishment of an airport at Hollongi.

“The detailed proposal is under submission with the Ministry of Civil Aviation.  It is encouraging to learn that the preparation of a detailed project report for the project by the Airports Authority of India (AAI) is likely to be completed by July 20 and forwarded to the Ministry of Civil Aviation byJuly 30,” Khandu informed while adding that the Steering Committee is likely to approve the project proposal by August 2018 along with all the mandatory clearances.

Considering the fact that Arunachal Pradesh is one of the very few States with no airport in its Capital and the people deprived of air connectivity, Khandu requested the Union Minister to expedite all clearances of the project.

The Arunachal Pradesh cabinet had on May this year approved the recommendation of the committee constituted to study the feasibility of construction of a Greenfield airport at Hollongi for onward submission to the Central government.

The proposed airport site measuring 948.56 acres is located 25 kms away from the state capital.

The Greenfield airport project had earlier ran into rough weather due to controversies over the site selection. Initially, the site was selected as Karsingsa but owing to technicalities, the Director General of Civil Aviation (DGCA) and the AAI had asked the state government to find some other site for the airport.