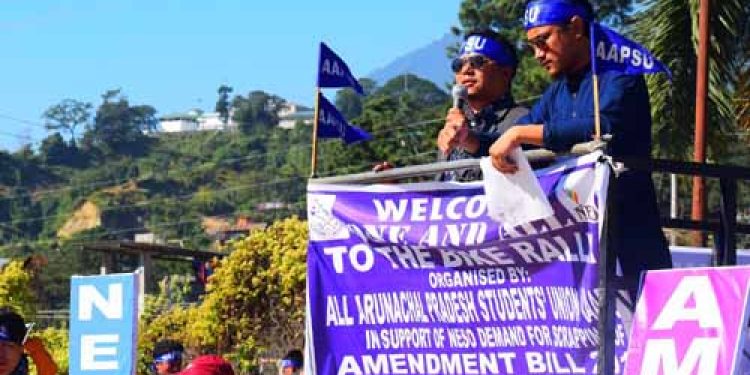 The All Arunachal Pradesh Students’ Union (AAPSU) on Friday took out a massive bike rally from the Nikum Niya Hall in Nirjuli near here echoing the North East Students’ Organization (NESO) demand for scrapping of the ‘proposed Citizenship Amendment Bill, 2016.

The organization had on November 14 announced a series of northeast-wide agitation programmes to demand total withdrawal of Citizenship (Amendment) Bill 2016, Foreigner (Amendment) Order 2015, Passport (Entry in to India) Notification 2015 and long term visa.

Addressing a large gathering at the Tennis Court in IG Park, here (the place where the rally culminated, NESO coordinator Pritam Bhai Sonam said that they are not against any religion or community, but against the refugees who are seeking a permanent settlement through the Bill. “This Bill is a threat upon the indigenous people of Arunachal as well as the entire northeastern region. If it is not scrapped, the northeast will burn in agitation. Moreover, we are all prepared to resort to any kinds of democratic movements to keep this bill at bay,” he said.

Warning that their opposition to the Citizenship Amendment Bill will continue, AAPSU President Hawa Bagang called upon the State government and Chief Minister Pema Khandu to take their stand against the Bill.

“The Meghalaya and Mizoram governments have already resolved and announced to oppose the Bill, so why can’t our Government do the same? It is already clear that the Citizenship Amendment Bill, if introduced, will bring only miseries on the indigenous people’ Bagang said.

Echoing Bagang, union general secretary Tobom Dai also called upon the public of to demonstrate their solidarity and loyalty towards their land by standing up against the “anti-people Bill”.

“North East is not a dumping zone for refugees and the government at Center should know this. We will never back out from protecting our land and our rights,” Dai said.