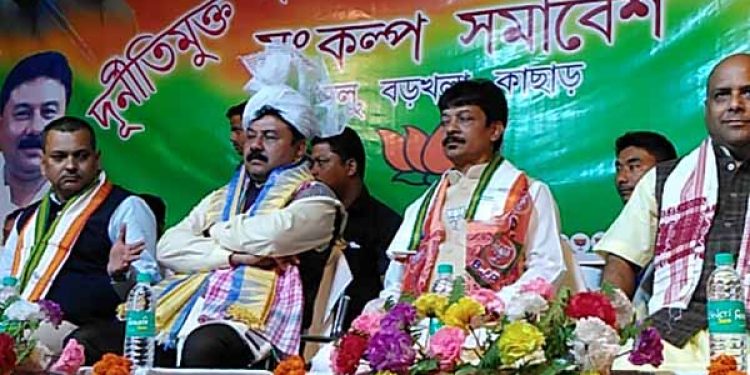 State BJP President, Ranjit Kumar Das, upon his arrival on the tarmac of Kumbhirgram airport on Friday evening, went straight ahead, to hold three panchayat election rallies in Cachar district.

The razzmatazz put on display was of a party desperate to win this year’s panchayat polls and its state president, too, didn’t hide the bare facts that were laid before the public by the election officials. Addressing the gathering, and that too in ‘bengali’, Ranjit Das, said, “Out of the 700 odd seats which has only one candidate in fray and declared as winners, BJP alone holds more than half such seats. This picture itself indicates the trend that is showing and our party is going to win thumpingly in all the districts of Assam.”

He added, “I have spoken with many, not just from our party, but ‘others’ too, and they are of the opinion that we would be the number one party in Cachar. If that does not happen, I won’t step in Cachar district any more,” said Das.

Whether to please the crowd in attendance or a political gimmick, Ranjit Kumar Das also in his speech, said, “Assamese community at large is responsible for tarnishing their own identity and not the Bengalis. In Assam, opening up of Bengali schools has ceased and in Assamese medium schools the lion’s share of the students are Bengalis. Assamese community students prefer English medium schools than the schools run in a medium of their own mother tongue, as per reports.”

At his second election rally in Dolu under Borkhola, received by a cavalcade of cars and bikes, and the beat of the drums, Ranjit Das was welcomed by local BJP MLA Kishore Nath and his supporters. Addressing a gathering of more than a 1000 anxious supporters of the party, Ranjit Das, said, “This time we have fielded more than 7000 minority candidates, especially, from the Muslim community. We have fielded 80 odd ZPC members of this community and we are approaching the voters with only one motto in mind and that is of driving away corruption.”

Having said that, Ranjit Das made all his candidates under Borkhola mandal to take a pledge on the dais of staying away from making money with the public fund, or else, he himself or his party would register cases against his own GP, AP or ZPC members. Not to be left out of addressing something on NRC or Citizens (Amendment) Bill, Das said, “The agitation and rallies going on in Brahmaputra valley are miniscule and only a few people gather together and form an association to oppose this bill. People at large has understood the significance of getting this bill passed,” a remark, which can open up another round of debate for his comments on his return back to Brahmaputra valley.

Kabindra Purkaystha, former union minister, was quick to point out in his speech that his party’s stand is very clear of passing the Citizens Bill in ‘Toto’. Why should one delete the name of Bengali or Bangladesh, he fumed. Lambasting, the Indian National Congress, he said, this party is the only stumbling block in getting this bill passed.

He went on, “If all the parties have been united on this bill, it could have easily sailed through by now. You all have made the sitting MP from Silchar, defeating me, who says that she is in favour of this bill, while, her leaders don’t want this bill to be passed. We would have this bill passed in its letter and spirit, for which, we are in touch with the centre or our leadership in Delhi on a regular basis.”

It was close to 7PM when the entourage of Ranjit Das moved for its final rally at Kalain of Katigorah. But, the end of a campaign rally in Dolu also witnessed the BJP party ‘candidates’ dancing in merriment.

Can BJP dance all their way to take over the reins at the rural level, is only a time, or rather, the 12th of December would tell.