Not only in Pasighat, in the whole of Arunachal Pradesh the feeling of nationalism is very “strong” and Modi is revered 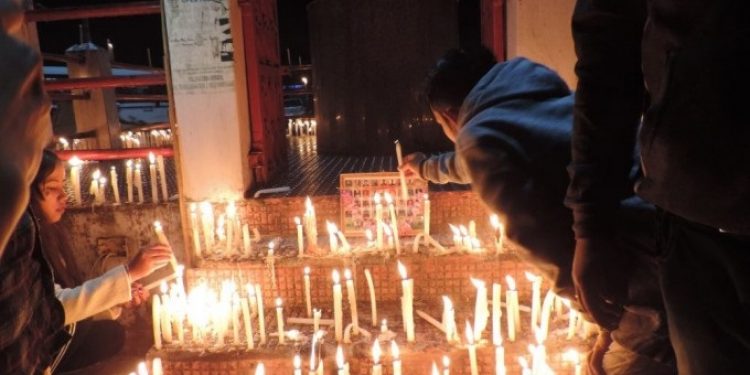 On February 16 last, Pasighat, a town along the banks of the meandering Siang River in Arunachal Pradesh, honoured the Pulwama martyrs.

Pasighat is a town on India’s eastern tip. Hundreds of people – political leaders, students and the migrant business community – took out a candle-light march to “honour the Pulwama martyrs”.

Reports stated that Pasighat East constituency’s BJP MLA, Kaling Moyong, led the march. His bete noire Bosiram Siram of the Congress walked alongside Moyong. Burying all differences, that day, they marched together on that “patriotic walk”.

“The feeling of nationalism is very strong across Arunachal Pradesh. We love India and hate China,” says Kanggong Tayeng, a 25-year-old B Ed student at the Daying Ering College of Teacher Education, who took part in that march. May 23 will decide which way the country wants to go.

Tayeng further stated, “(Narendra) Modiji should return as Prime Minister and continue with the bold steps against terrorism. There should be no appeasement of terrorists.”

However, experts and political leaders say that there is much more to the elections in Arunachal Pradesh than just the Citizenship Bill – the call of tribes and clans, a concoction of money and inter-personal community ties.

Two women walk into the home of Kento Rina (70), MLA of Nari-Koyu Assembly Constituency in Pasighat. They ask for Rs 30,000 to buy a laptop. One of them is a final year B Com student at the town’s prestigious Jawaharlal Nehru College

They do not get the money and the duo leave disappointed. “Many of them want money all the time. The dominance of money culture in elections is the worst thing to have happened in this state,” says Rina, the MLA.

“Candidates do not represent a party or ideology, but their clans or communities. They will seek support from their clan members by displaying their material resources. The monetary factor comes first, followed by clan affiliation and personal charisma. Once candidates get clan support, they go all out to get official nomination from the party in power,” says Nani Bath, a faculty of Rajiv Gandhi University near Itanagar.

A case-in-point is chief minister Pema Khandu who won on a Congress ticket in 2014 before defecting to the regional party PPA and then to the BJP.

Tobom Dai, general secretary of the powerful All Arunachal Pradesh Students’ Union (AAPSU), says that, “when the electorate is so small, everyone has an expectation from the leader”. “The youth want jobs while businessmen want contracts. Unemployment is an issue across the state. Every youngster wants a government job. The system is such that the MLA will try to fulfil their demands and that increases the probability of corruption,” says Dai, who was born in Pasighat and lives in Itanagar.

Pasighat town was established in 1911 by the British as an administrative headquarters – a first in what is today Arunachal Pradesh.

The “nationalism” quotient is high in Arunachal Pradesh, more so after the India-China war of 1962. “Jai Hind” is a common greeting and Hindi is a common language.

“The indigenous people of the state, unlike the rest of the states in the Northeast, are oriented to be nationalists because of successive policies of the government, keeping in view the geostrategic location of the state,” says Bath, the academic.

Youths in a local WhatsApp group may debate about whether the local MLA has been able to develop infrastructure in their village and why a bridge has not been completed yet.

But, irrespective of these debates, there is an overwhelming support base for Modiji. People here speak Hindi and watch a lot of Hindi news channels. “Arunachalis are patriotic and we understand how Modiji is talking about national interest,” says Tayeng.