The All Idu Mishmi Students’ Union (AIMSU), headquartered at Lower Dibang Valley in Arunachal Pradesh, has called for a 12-hour strike-cum-mass rally to be organised today (February 25) over the PRC issue and killing of protestors in police firing.

As per a notice issued by Mompa Lingi, general secretary and Mapu Mihu, president of of All Idu Mishmi Students’ Union, the strike will start at 5 am in the morning and will continue till 5 pm.

Through the notice, the leaders of All Idu Mishmi Students’ Union have requested all the people of the state to cooperate them in the strike and rally organised in protest against PRC for six non-Arunachal Pradesh Scheduled Tribe (APST) communities living in Namsai and Changlang districts.

The union also mentioned that the strike and the mass rally have been organised in protest against killing of “innocent lives”, who sacrificed their valuable lives for the protection of the rights of the indigenous people of Arunachal Pradesh.

The union has appealed the people to show solidarity in the mass rally.

Following unrest over the PRC issue, the Arunachal government has clarified that it will not go ahead with granting PRC to the six non-APST communities.

Informing it on his Twitter handle, Union Minister of State for Home Kiren Rijiju on Sunday said: “Arunachal Pradesh State Govt has already passed an order not to accept PRC as recommended by JHPC. Everyone must come together without blaming each other for the sake of peace. It’s very unfortunate that innocent lives were lost in the violence.” 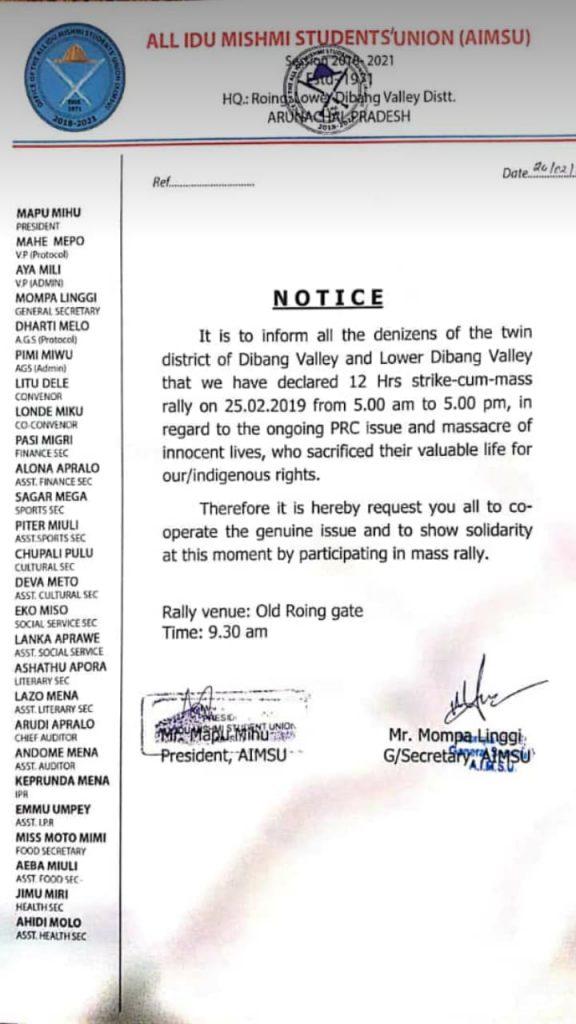