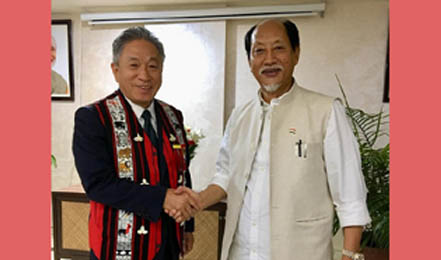 Nagaland Chief Minister Neiphiu Rio held a meeting with Ambassador of Taiwan to India Chung Kwang Tien at Nagaland House, R.K. Puram, New Delhi, on Tuesday to seek cooperation from Taiwan for technical collaboration in the bamboo sector for value addition and its promotion in Nagaland.

The meeting discussed about building a workable association by which Taiwan will help the bamboo industry in the state and the Northeast region.

It was also proposed to establish an India-Taiwan Bamboo Technical Centre in Dimapur.

This pilot plant will be implemented by the Nagaland Bamboo Development Agency (NBDA) in association with Taiwan-based bamboo companies and experts in the areas of research and development, technology transfer, skill development, investments in bamboo sector and marketing.

Rio called upon the experts from Taiwan to intervene and assist in augmenting the bamboo industry in Nagaland, potentially to compete in the international market.

The Taiwanese Ambassador expressed his willingness to tie up with Nagaland to further promote the bamboo industry.

It was decided that a team from Taiwan will visit Nagaland and work out modalities to establish the centre at the earliest. Both the parties also agreed to work out details for formalising an MoU at the earliest to promote this cooperation.

Other aspects of this cooperation will be to foster socio-economic and cultural relation between the people of Taiwan and Nagaland.

“Had a positive meeting with The Ambassador of Taiwan to India Mr. Chung Kwang Tien. We discussed issues relating to fostering partnership, strengthening ties & building mutual trust. I look forward to strengthening our bilateral relations for mutual benefit,” Rio tweeted.

The meeting was chaired by Abu Metha, advisor to chief minister and attended by officials from the Embassy of Taiwan, including Frank T.F. Tsay, assistant Ambassador, and Prof. Dr Henry H. Chen, counsellor and director, Science and Technology Division, Embassy of Taiwan.