The AICU flag, which started its journey from New Delhi, would now be sent to Shillong 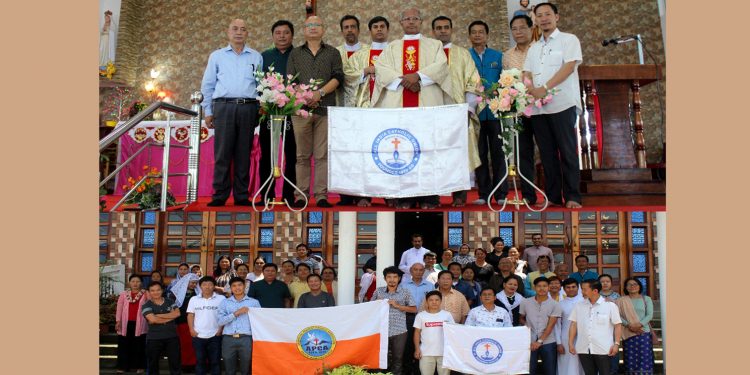 The All India Catholic Union (AICU) flag as it reaches the St. Joseph Cathedral at Nyokum Lapang in Itanagar on Thursday. Image credit - Northeast Now

A flag for the All India Catholic Union (AICU), which has been travelling the country as a part of the union’s 100th anniversary celebration, reached the St. Joseph Cathedral at Nyokum Lapang in Itanagar.

The flag, which started its journey from New Delhi and would travel to different other Catholic dioceses in the country, would spread the message of love, peace and brotherhood among the Indians and also to foster the spirit of unity among the Catholic laity.

The AICU flag was received by Arunachal Pradesh Catholic Association secretary general Nabam Pekhi at Itanagar on Tuesday and following this, a special mass prayer was conducted on Wednesday morning at the St. Joseph Cathedral.

Rev Fr Jacob, the vicar general of Itanagar diocese along with the priests from Seppa, Palizi and Naharlagun, led the mass prayer while senior church leaders, nuns and a large number of believers participated in the proceedings.

The AICU flag would now be sent to Shillong, the capital of Meghalaya.