2 seriously injured due to landslide in Itanagar

Landslide blocked NH 415 and destroyed several vehicles, most of them which were parked near the highway 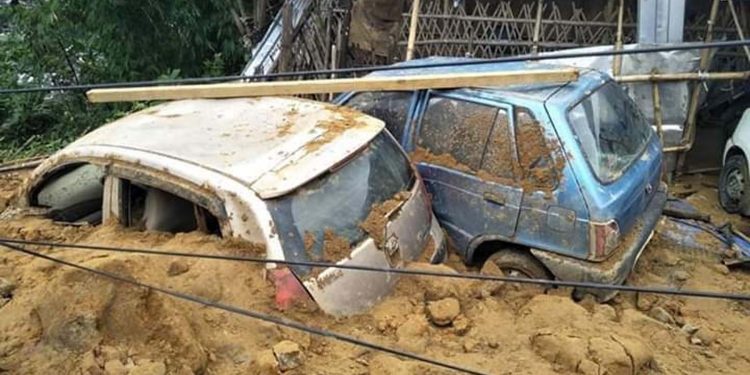 A view of landslide in Itanagar. Image credit - Northeast Now

Two persons sustained serious injuries in a landslide triggered by heavy rainfall on National Highway 415 near the police headquarters at Itanagar on Wednesday.

People near the site rushed to the spot and succeeded in rescuing them.

The two were immediately rushed to the RK Mission Hospital, where it was found that they had injures in their hands, head and chest but they were out of danger.

He informed that after receiving the information about the landslide, he called the SDRF and NDRF teams for the help. In the meantime, deputy SP (Itanagar) J. Molo along with a few police personnel rushed to the spot.

Apart from the SDRF, NDRF and police, teams of ITBP, CRPF and five excavators reached the spot to rescue the injured and clear the road for traffic.

The landslide blocked the main highway and also destroyed several vehicles, most of them which were parked near the highway.

The house of one Langpu Yatung was also partially damaged by the landslide.

Home Minister Bamang Felix visited the spot and the injured duo at the hospital and assured all possible help from the State government. He also extended his gratitude to the unidentified people who volunteered to save their life, adding that the saviours will be remembered.

Felix appealed to the people of the State to be vigilant, active and prepared during the monsoon in order to avert any eventualities and disasters. He requested them to maintain a safe distance from flood, landslide-prone areas and to look for a safe area during such a situation.

He also said that the State government has asked the respective district administrators to issue prohibitory order in the landslide zones. Thanking the NDRF and SDRF teams for their prompt action to rescue the affected people, he requested the people to cooperate during such incidents.

“The personnel of the department concerned may not be in time during such incidents, but our effort is to help and work for the welfare of the people at the earliest,” he said, adding that landslide and floods are unpredictable.