In West Kameng district, the road from Pinjoli bridge to Tenga has been totally cut off 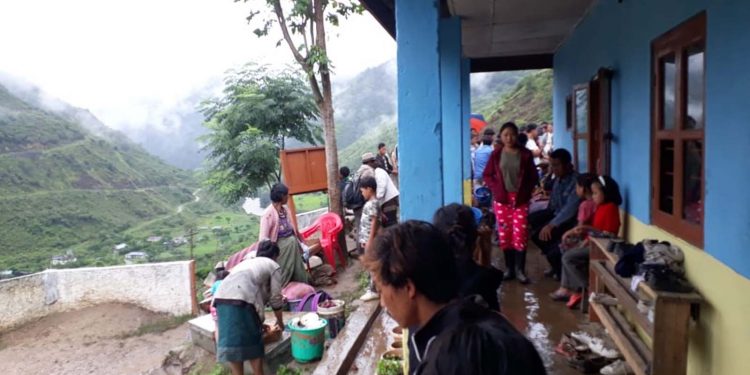 Massive landslide in western Arunachal Pradesh in the last few days led to the death of two minor students in early morning on Thursday in Lumla sub-division of Arunachal Pradesh’s Tawang district.

This has been informed by additional deputy commissioner of Tawang district, R.D. Thuggan.

According to Gome Tsering, a local informed, “In the early morning today, there was heavy landslide at around 3: 30 am following torrential rainfall causing colossal damage in Namtsering Residential School resulting in the death of two girl children.”

The deceased girl children have been identified as 10-year-old Rinchin Lhamu, who was a Class V student and Genden Wangmu, an 11-year-old Class VI student.

And two other minor students were seriously injured.

One of them has been identified as 12-year-old Sange Pema, who is a student of Class VII.

“The road condition has also turned out to be worse due to inclement weather, landslide in several portion from Tawang to Lumla area due to which the people have suffered a lot,” Tsering said.

Meanwhile, according to a notification issued by the deputy commissioner of Bomdila, Dr. Sonal Swaroop, the Bhalukpong-Chariduar-Tawang road has been closed with effect from July 11 to August 15 as it was cut off due to massive landslide triggered by a cloudburst at Nagmandir Kaspi area on July 8 last .

In West Kameng district, the road from Pinjoli bridge to Tenga has been totally cut off.

Swaroop asked the BRTF to use maximum of earth-cutting machines and use more manpower to clear the road.

During landslide on July 8 last, one residential boys’ hostel partially damaged and 80 students including 36 girls and 44 boys along with staff members were evacuated to a safer place.

In the incident, one 23-year-old lady identified as Kanchi Mosau has gone missing while her husband was injured.

More than 110 people of 11 houses have been evacuated from Kaspi village to safer place.