‘About 55% of adult use tobacco in Manipur’ 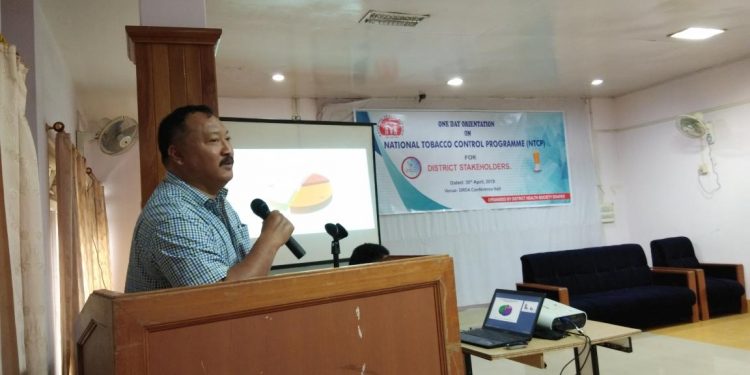 About 55% of adult in Manipur used tobacco spending an average of Rs 350 in a month by an individual, according to State Nodal Officer Somorjit Ningombam of National Tobacco Control Programme (NTCP). Ningombam also said that Manipur ranked 3rd in the consumption of tobacco and its product in India.

The nodal officer was speaking on the ill effect of Tobacco during one day orientation on the NTCP for the district stakeholders organised by District Health Society, Senapati at DRDA Conference Hall in Senapati district headquarters, 60 km north of Imphal on Tuesday.

He also said that tobacco is one of the common risk factors of major life-threatening diseases like Cancer, cardiovascular diseases (CVD) which kills 6 million people every year while 0.6 million face premature death due to passive smoking.

In India, tobacco kills 8-9 lakhs people every year. 2,500 Indians die every day of tobacco related diseases. 89% of smokers become addicted to tobacco by the age of 18 years, he added.

According to Global Adult Tobacco Survey, 275 million adults in India (15 years and above) which is nearly 35% of the population consume tobacco; 206 million used smokeless tobacco (Khaini, gutkha by 25.9% adults; smoking in the form of Bidi (9.2%) and cigarette (5.7%).

The initiation of tobacco use begins from 17- 18 years. Exposure to second hand smoke remains high with 52.3% at home and 29% at public place.

He highlighted that the cancer caused by tobacco consumption are found in mouth, throat, lungs, larynx, foodpipe, urinary bladder, kidney, pancreas and cervix.

Additional public prosecutor, Senapati A Koshia, speaking as a resource person in the day’s orientation programme said that the Cigarette and Other Tobacco Products Act, 2003 enacted by the Parliament on the 54th year of Republic of India was to provide the regulation of Trade and Commerce in the production, supply and distribution of cigarettes and other Tobacco products matter concerning therewith or incidental thereto.

Participating in the programme, DC Senapati Somorjit Salam, said that the Act which has been passed will be implemented soon in the district.