Assam: Show cause notices to 46 Dhubri teachers for absence in school 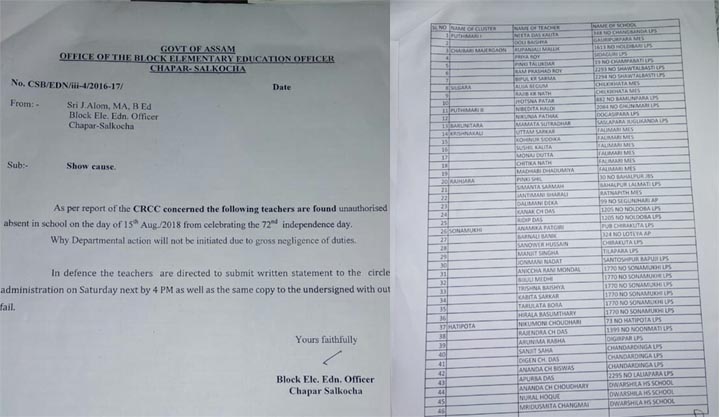 The notice issued to 46 teachers of Dhubri. Image - Northeast Now

A total of 46 school teachers of Dhubri district have been issued show cause notices by the Education Department for their alleged unauthorized absence from schools on the occasion of the 72nd Independence Day.

Block Elementary Education Officer (BEEO), Chapar of Dhubri district has issued the letter vide no CSB/EDN/iii-4/2016-2017 dated 16/08/2018 said that as per report of the CRCC concerned, 46 teachers of different schools were found absent in school on the day of August 15, 2018 from celebrating the 72nd Independence Day and accordingly the department has asked to the teachers concerned why departmental action would not be initiated due to gross negligence of duties.

The BEEO, Chapar has also directed the teachers concerned to submit their written statements on or before August 18, 2018 before the Circle Officer, Chapar as well as to the authorities of the Education Department without fail.

The teachers would be given a two-day time to submit their reply before the Chapar Circle administration. Action would be taken if their replies to the notices are found unsatisfactory, as informed by J Alom, BEEO, Chapar.