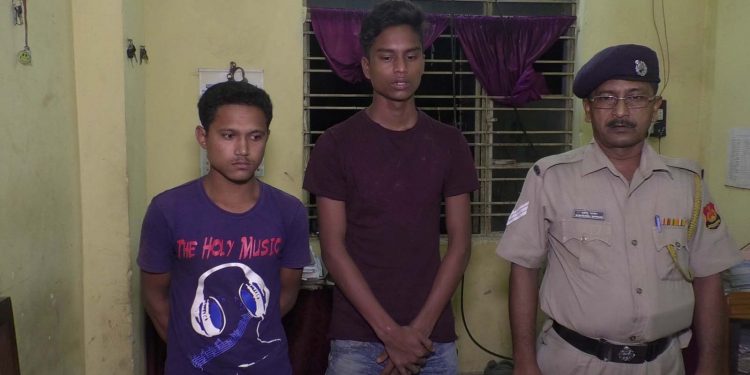 Two Myanmarese nationals were arrested by Tripura police on Monday evening after locals of Rajnagar area on suspicion apprehended them and handed over to the police.

“Locals of Rajnagar area caught them and during interrogation, they were telling different stories. They did not say actually from where they came and later it was revealed that they are from Myanmar,” said Kanu Ranjan Deb, officer-in-charge of Battala police outpost.

He also said, “We got an identity card from one of them but why and how they came here, no one knows. We have interrogated them and during interrogation they revealed that they were in some other place and someone sent them here through some route. Now, we shall produce them in the court for legal procedure,” added Deb.

The police officer also said that the arrested duo does not have proper documents for entering the Indian territory.

Meanwhile, the arrested Myanmarese citizens could not make it clear to the police how they had landed in Agartala and a big hurdle for the police is that they have failed to understand their language though it has some similarity with Bengali, but the accent is totally different.

Fakira Bazar or Fwaira Bazar is in the northern Maungdaw district of Rakhine State of Myanmar where reportedly on August 25, 2017, Hindu villages in a cluster known as Kha Maung Seik were attacked and 99 Bengali Hindu villagers were massacred, allegedly by Muslim insurgents from the Arakan Rohingya Salvation Army (ARSA).

A month later, the Myanmar Army discovered mass graves containing the corpses of 45 Hindus, most of whom were women and children.