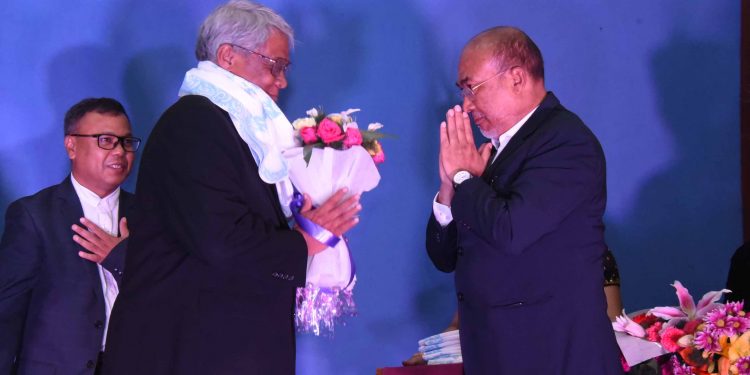 With a colourful cultural sequence, Manipur Chief Minister N Biren Singh hosted a state dinner for the visiting Myanmarese delegates led by Myanmar’s Sagaing Chief Minister Dr Myint Naing at the lawns of a hotel in Imphal on Monday night.

Sagaing Chief Minister Dr Myint along with Minister for Development, Myint Kyi, Minister for Social Welfare Dr Zaw Win, seven other secretaries and officials arrived in Imphal on Sunday on a three-day visit to attend the Manipur Sangai festival which is underway at different places of the State since November 21.

Soon after their arrival, the Myanmarese dignitaries watched an exhibition football match played between women players of Manipur and Sagaing region of Myanmar at Khuman Lampak Main Stadium in the heart of Imphal town.

Another exhibition match between Manipur women team and Mandalay women team was held at the same venue on Monday.

The team also participated in the day long India-Myanmar Business Summit on Monday.

Deputy Chief Minister Yumnam Joykumar, ministers, MLAs and other high ranking officials of the State Government, women football players and officials of Mandalay, Sagaing and Manipur were also present at the dinner.

On behalf of the Chief Minister of Mandalay, representatives from the Myanmarese state also handed over gifts to Chief Minister Biren Singh, Letpao Haokip and convenor R K Shivachandra of state level committee on actualization of the Act East Policy.

It may be mentioned that as part of improving the relationship between Myanmar and Manipur, Manipur women football team had visited Mandalay and played exhibition matches in Myanmar besides holding business summit in the neighbouring country sometime ago under the initiative of state level committee on actualization of the Act East Policy.