One month’s ultimatum to make Agartala clean or no job: Tripura CM 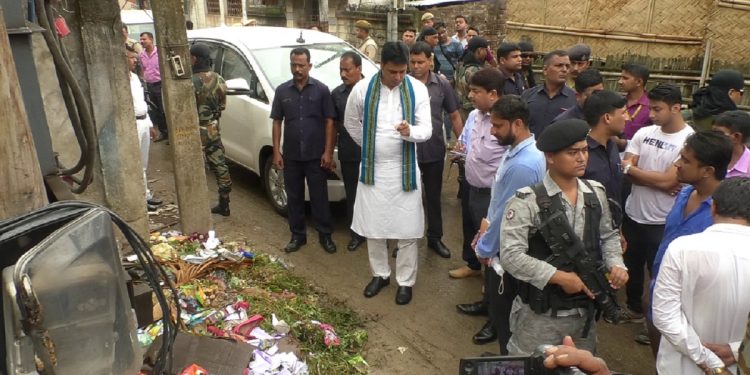 Tripura chief minister Biplab Kumar Deb has given an ultimatum of one month, right from top to bottom to all those engaged with cleaning of the capital city of Agartala.

Deb on Monday went for a surprise visit to various parts of capital Agartala especially the busy market areas to inspect the ground reality of cleanliness drive towards a ‘clean and green Agartala’.

He was highly dissatisfied with the cleaning activity of the Agartala Municipal Council after finding garbage scattered all across and the sewerage system totally blocked due to lack of proper cleaning.

Deb accompanied by the special secretary of Urban Development department secretary Kiran Gitte and several officials of the Agartala Municipality Corporation was surprised to find garbage spread across various parts of the market areas beside most of the water bodies polluted beyond imagination and drains blocked as have not been cleaned.

In fact the chief minister expressed that the entire area that he had visited was like a dumping ground and it was mainly due to the lack of initiative of the authority who rarely visited these areas to inspect the work of the ground cleaning staff.

Later speaking to reporters, the chief minister said that that a section of the elected councilors and sector officers they do not go for ground inspection if at all cleaning takes place.

“Deep up to eight feet the drains are blocked with garbage but no cleaning has taken place, does the councilor and sector officer not see this?” he asked.

“Now I have instructed all officials including the zonal officers to be active in the ground for 15 days and other 15 days in the office for administrative work and suspend those who are not willing to work,” he added.

“And if they do not work and in protest go for a strike then they will be put behind the bars. My target is to make Agartala garbage free, mosquito free and malaria-free,” said Deb speaking to reporters.

He also expressed that it came to his notice that in most of the areas the drains have blocked with some construction and so water cannot flow.

Deb has given one month’s ultimatum to the officials to take appropriate step to clean the area besides fixing responsibilities.

He also viewed that the municipal councilors who have been elected for five years instead of alleging others should themselves visit their constituencies to keep them clean and if required meet the mayor for solving their problems.

The chief minister said that he would be visiting these areas after a month period to see the progress of work.

Earlier he had given an instruction to all officials including the DM’s of all districts to go for a ground visit and inspection works on every Friday.