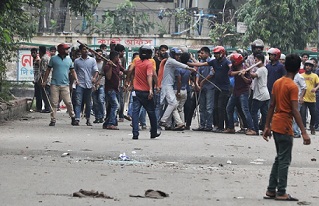 An award-winning photographer was arrested by the Bangladesh Police for allegedly making “provocative comments” in media interviews about student protests that have gripped the country for more than a week.

An Aljazeera report stated that at least 20 plainclothes officers picked up Shahidul Alam, 63, from his Dhaka home late on Sunday; hours after his comments were broadcast on Al Jazeera.

The report further quoted police official Moshiur Rahman as saying, “He has been brought to our office early this morning [Monday]. We are interrogating him for giving false information to different media and for provocative comments”. “And he could not give proper answers. He admitted that these are his personal opinion.”

Police told lawyers and family friends Alam will likely be charged under the International Communication and Technology Act (ICT). “It is an unclear situation as no one has been able to meet him but the police … told us that a case is being filed against him and he will be taken to the court today,” said Shireen Huq, a close friend of Alam and a well-known women’s rights activist.

Alam had been charged under Section 57 of ICT for spreading propaganda against the government. He has been remanded into police custody for seven days. “He will be under detective custody on interrogation,” Chowdhury said, adding that a video posted on social media purportedly showed Alam taken to court.

“He was visibly limping; two people had to hold him. We don’t know why is this the case,” he added. Rights groups demanded Alam’s immediate release.