They were sent to Dandong Rishang garment factory in Dandong, a city bordering North Korea in May 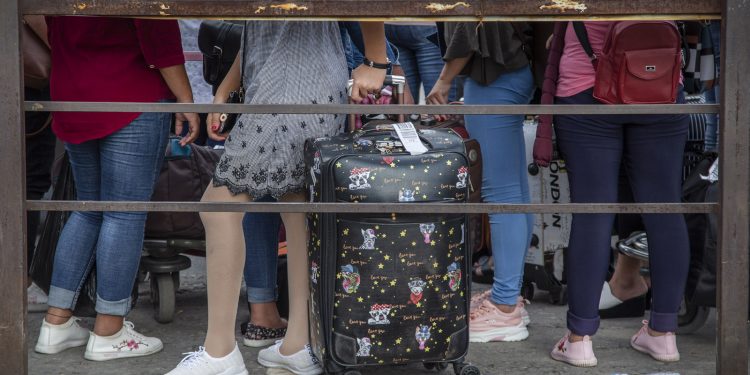 The 44 duped Nepali women, who were tricked and taken to China landed back in Kathmandu on Sunday.

They came in batches in three different flights of China Eastern and China Southern Airlines.

The women were sent to Dandong Rishang garment factory in Dandong, a city bordering North Korea in May by Compass Recruitment- a foreign employment agency based at Pingalasthan, Gaushala.

“The women were promised a salary of $400 per month and the same was also mentioned in the demand letter attested by the Nepali Embassy in Beijing,” a Nepali government official said on Sunday.

“However, they were paid only $50 for the first month and after protests and additional $100 were paid to them,” the official informed.

The Himalayan Times quoting a victim- Sunita Limbu- wrote, “We realised we were duped only after we received the first month’s pay.”

“The agency made us various papers to sign, some of which mentioned $250 monthly salary and others mentioned $400,” Limbu further informed the daily.

Some women further informed that the agent had promised them $250 for first three months as in during these months they would be imparted training and once the training got over, $400 would be paid to them.

The women further informed that when they refused to take $50 as salary and stopped going to work, their employer came to them and handed an extra $100 promising that the salaries would be raised gradually.

While 20 women resumed work, 24 however did not join back.

The victims further said that the Chinese employer had already paid for their airfare and training costs.

“When the employer learned that the Nepali recruitment agency had collected an additional amount of Rs 70,000 from us, he was shocked and when the agency was summoned, it vanished,” The Himalayan Times wrote quoting a victim.

The Chinese company had sought only skilled people for sewing jobs and the agency was paid a certain amount of money.

The agency, however, lied to the women and they were told that it was a packing job for which they were being sent.

The agency also handed sewing certificates to the women, the purpose of which they realised only after landing in China and they realised that they were being fooled.