Nepal Prez appoints KP Sharma Oli as next PM, to be sworn in at 4 pm 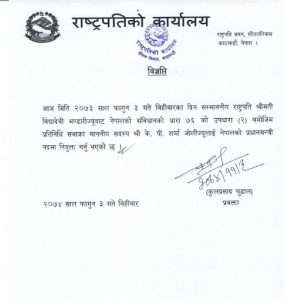 Deuba was elected as the 40th PM on June 6 with the support from CPN (Maoist Centre) which is now a part of left alliance and opting for merger with CPN-UML. “The elections of three tiers of government have been successfully held under my leadership setting the foundation to long transition,” PM Deuba told in the television address.

PM Deuba briefly talked on the role played by the incumbent government in the immediate past. He deemed the tenure of his government as a successful one claiming that the government had peacefully conducted elections of the three levels of governance under the new federal structure.

He also expressed gratitude toward the people and media for being supportive to the government and for helping with the success of the tiers of election.

During his speech, Deuba also defended the government’s decision to bring down the age limit for old-age allowance from 70 to 65.

Deuba’s resignation came in the wake of EC’s submission of parliamentary poll results to the President, paving way for the formation of the new government.