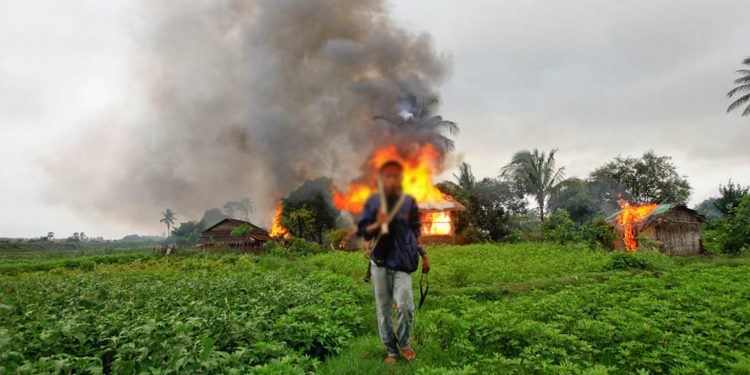 132 civil society organizations have called for the protection of civilians in armed conflict in Myanmar.

The organisations have asked the national government to comply with its obligations under the Geneva Conventions and UN Security Council Resolutions 1265, 1296 and 1325.

The organisations are from all over the world and are influential in their regions.

The current targeting of innocent civilians in the conflict between the Arakan Army (AA) and the Myanmar military amounts to war crimes and must immediately cease, a statement signed by these organisations said.

The conflict between the Myanmar military and the AA has displaced up to 150,000 people in Rakhine and Chin States since 2018 and its impacts are being felt most keenly by innocent civilians.

In the past 30 days alone, 28 villagers in Chin State, have died as a result of the conflict.

The Myanmar military has been deliberately targeting civilians through the use of airstrikes from fighter jets.

Among the victims were two children, a mother and a baby.

This was the second airstrike within one week, as more civilians were injured during an attack on Bawngwa Village on 31 March.

Last month, on 14 and 15 of March, multiple attacks on several villages in Paletwa Township killed 21 civilians, again including children.

These attacks have been conducted with total disregard for civilian life and would constitute indiscriminate attacks or even direct targeting of the civilian population,” the joint statement said.

“Common Article 3 of the Geneva Conventions specifically prohibits “violence to life and person, in particular murder of all kinds” of civilians and persons hors de combat.”

Besides, “wilful killing” of protected persons is listed as a grave breach under all four Geneva Conventions, which Myanmar ratified in 1992.

“Thus, targeting innocent civilians, such as the airstrikes on villages in Paletwa Township, can be considered a serious violation of international humanitarian law and customs, which constitutes as war crimes under the Rome Statute,” the statement said.

Furthermore, UN Security Resolutions 1265 and 1296 addresses the protection of civilians in armed conflict.

Resolution 1265 “strongly condemns the deliberate targeting of civilians in situations of armed conflict as well as attacks on objects protected under international law, and calls on all parties to put an end to such practices” while also emphasizing “the responsibility of States to end impunity and to prosecute those responsible for genocide, crimes against humanity and serious violations of international humanitarian law.”

Additionally, UN Security Council Resolution 1325 on Women, Peace and Security, “Calls on all parties to armed conflict to take special measures to protect women and girls from gender-based violence, particularly rape and other forms of sexual abuse, and all other forms of violence in situations of armed conflict.”

This is especially salient in the case of Myanmar, which has repeatedly used sexual violence in armed conflict for decades.

Related to this the Joint Communique that the Myanmar government and the United Nations Special Representative of the Secretary-General on Sexual Violence in Conflict signed in December 2018 has not been brought to women from the conflict-affected areas for consultation while the ongoing sexual and gender-based violence committed by the Myanmar military in ethnic areas flies in the face of any supposed commitment of the government in signing such Joint Communique with the UN’s SRSG’s office in the first place.

The statement pointed out that the Convention on the Rights of the Child (CRC), which Myanmar has ratified, recognizes “that every child has an inherent right to life” and Myanmar must ensure to the “maximum extent possible the survival and development of the child.”

As a state party to the Geneva Conventions and the CRC, and as a UN member state, Myanmar should comply with these instruments of international law.

Meanwhile, the Association of Southeast Asian Nation’s (ASEAN) reluctance to become substantively involved is a missed opportunity for the block to play a key role in resolving the increasing escalation of violence.

Rather than standing idly by and endorsing the narrative of the Myanmar government, ASEAN can seek to couple its humanitarian initiatives with engaging the government in addressing root causes of violence, while utilizing their good offices to seek a solution to the ongoing violence that is affecting countries beyond the borders of Myanmar.

“As the whole world is taking measures to protect against the coronavirus pandemic, the targeting of innocent civilians in southern Chin State, through the use of airstrikes and other military operations, is causing tragic and unnecessary loss that amount to war crimes, ” the statement said.

“It must end immediately. These war crimes are a blatant contravention to the Geneva Conventions and are destroying communities. We urge the immediate end to all attacks that target civilians and to protect the lives of innocent people.”