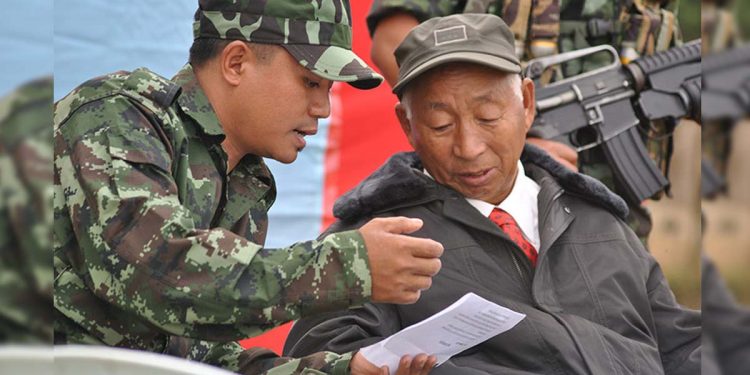 The NSCN(K) based in Mynamar seems to have split into yet another two groups with a faction of the group holding its plenary meeting on Tuesday and then removing incumbent chairman Yung Aung as its chief.

Aung is the nephew of the group’s founder, SS Khaplang.

This was stated in a press communique issued by the in-charge of the ministry of information and publicity of the outfit, Nikato Pilot Sumi, on Wednesday.

Sumi said these appointments were “mandated” and “necessitated” as former president Yung Aung has acted in direct contravention of the provisions of the Yehzabo (constitution) of the NSCN/GPRN.

It said Aung, without any consultation or meetings with concerned officials of the NSCN/GPRN, clandestinely established relationship and connived with the NSCN (Isak-Muivah) in trying to sabotage and undermine the “Naga sovereign rights”.

It said the NSCN (I-M) had categorically stated and signed the 2015 accord to be included under the ambit of the Indian Constitution, which is a direct challenge to the mandate of the Naga people.

Sumi in the statement said the NSCN/GPRN is mandated by the Nagas for the very objective of defending and achieving the inherent sovereign political rights of the Nagas and thus the former president has lost all mandate of the Nagas.

Aung, in violation of the very fundamental tenets of the “Yehzabo” and the conventions of NSCN/GPRN, acted alone without the knowledge or consulting any members of the NSCN/GPRN and tried to change the official seal of the GPRN by dispatching a newly self-designed seal to be used officially, which was rejected outright by all the officials of the NSCN/GPRN, the outfit alleged.

It said despite the “grave watertight charges” against Aung, the NSCN/GPRN patiently waited for nearly two years for him to come to his senses but he on his own volition deserted the NSCN/GPRN and unofficially defected to NSCN (I-M).

“Since then he has been doing the bidding of NSCN (IM) under the directive of the Indian government to sabotage and suppress our sovereign political rights,” it said.

The statement said Aung, on all counts, has been found guilty of serious dereliction of duty and conniving with elements who are trying to derail “our sovereign political rights”.

It added that the NSCN/GPRN reiterated and placed its faith and confidence in the wisdom of the Naga people’s mandate and in the leadership of Nyemlang Konyak Naga to lead the Nagas towards “our goal”.

It said the NSCN/GPRN will follow in the footsteps and visions of its great leader late SS Khaplang in fulfilling the Nagas’ aspirations for achieving the Naga inherent sovereign political rights and continue to extend support and solidarity to all nations “who are wrongfully oppressed in their struggle for freedom”.

In 2018, the Myanmar-based NSCN(K) split into two factions, one led by its impeached chairman and Indian origin Khango Konyak and the other by Yung Aung.

On April 6, 2015, a new faction by the name of NSCN (Reformation) was formed with Y. Wangtin Konyak as its chairman after he was expelled by Khaplang over misunderstanding on the abrogation of ceasefire with the government of India in 2015.

Meanwhile, the NSCN(K) led by Aung on Wednesday expelled Niki Sumi, Nyemlang Konyak Naga and Starson Iamkang Naga for organising “illegal meetings” without authorisation from the party, failing to report to the council headquarters despite repeated callings, heavy misappropriation of party funds and encouraging and spreading “isms” and “divisive policies” within the party.

“Today, due to the above reasons their expulsion becomes a necessity to save the party and our national struggle from further destruction,” the ministry of information and publicity of the Yung Aung faction said in a statement.

It said any party members conniving with the expelled officials will be automatically terminated from the party membership.