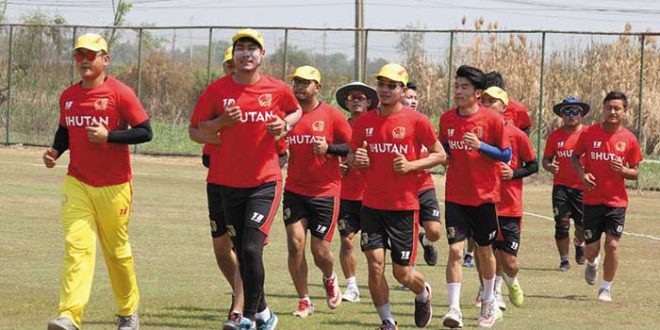 The teams are meeting for the second time in two consecutive years. Bhutan played China at the International Cricket Council World Cricket league qualifier in Thailand. Bhutan defeated China by 10 wickets to secure the first win of the world cricket league in Thailand last year.

Bhutan played more than four finals at ACC championships to date, including one by national women cricket team at ACC women’s U-19 championship in 2010.

Coach Damber Gurung said that the team played several finals but has not won a championship so far. “We hope to win the championship this time. The host Thailand will have home advantage, but we need to stick to the game plan. We have to be focused and active.”

National team left for Thailand on February 13, a week before the ACC T20 tournament to let the players get adapted to the weather and pitch situations.

“The ground surface is quite soft and the boys are not used to it. The pitch is different here,” Damber Gurung said.

The team has undergone three practice sessions and has played two warms up matches against Thailand and Myanmar.

“We need to be mentally prepared. Will try to win every match,” the coach said.

Captain Jigme Singye said that the team hopes to win. “We worked hard for this tournament.”

Damber Gurung expects his team to perform like it has done in the domestic tournaments.

A total of four countries – China, Bhutan, Thailand, and Myanmar–will take part in the tournament that begins Wednesday.

The match would feature Kesang Nima, the medium fast bowler, for the first time in the international tournaments. The bowler was selected based on his performance in the domestic tournaments.

The tournament ends on February 25.