Two tanks, used in the 1971 Bangladesh Liberation War, were shifted from Post Office Chowmuhani area of Agartala to the Albert Ekka Park in Lichubagan area in the capital city.

The tanks were shifted to the park in Agartala on Sunday morning.

The tanks were installed in Agartala after the end of the 1971 Bangladesh Liberation War.

The tanks were gifted to Tripura as a mark of the contribution of the Indian state in the Bangladesh Liberation War.

The two tanks were captured by the Bangladesh Mukti Bahini from the Pakistan Army during the war.

The tanks in Agartala continue to draw the attention of many for the last 48 years.

The Bangladesh Independence Day will be observed the next month and ahead of the celebration, the tanks were relocated.

Those, who come to Agartala from outside, visited the Chowmuhani area to have a glimpse of the two war-time tanks. 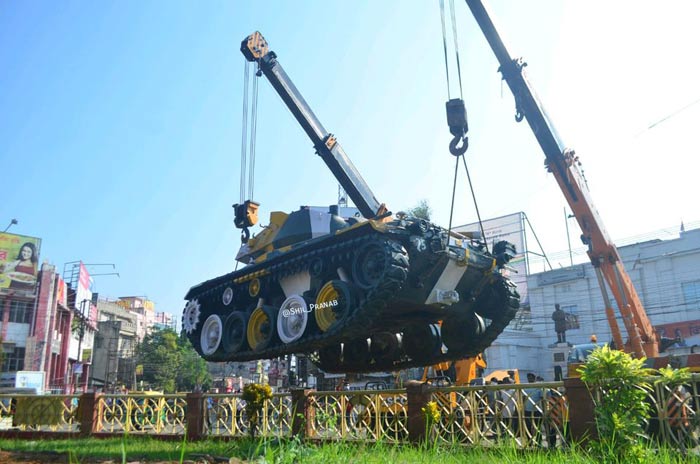 “The tanks have been relocated to ease traffic jam in the area,” the officer said.

However, a section of people and parties have expressed displeasure at the relocation of the tanks.

Pujan Biswas, a Youth Congress leader said, “The BJP Government is keeping no stones unturned to erase the history of Tripura as well as India. This tank at Post Office Chowmuhoni area was the last symbol of glory of the India-Pakistan war which is now being removed. The government should immediately restore this.”