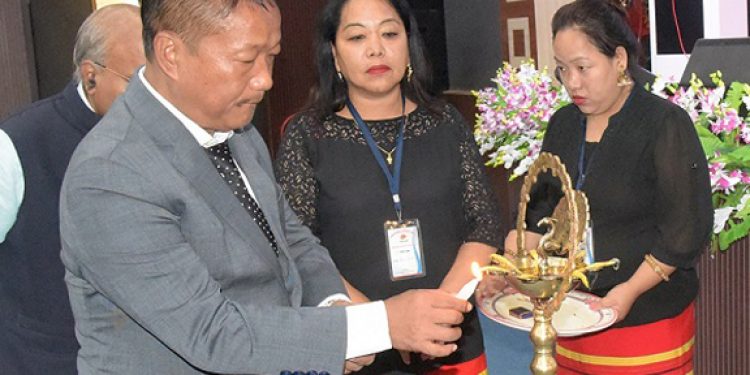 The first ever Literature Festival of Arunachal Pradesh began on a promising note at the Dorjee Khandu Convention Centre here on Wednesday.

Attending the inaugural function of the event as chief guest, IPR and RWD Minister Bamang Felix expressed his privilege to be amidst the renowned literary luminaries of the country and expressed hope that their presence will give a flip and impetus to the budding writers of the State.

“The objective of the Litfest is not only to create awareness on the importance of literature but it also aims to build a truly enlightened society, encourage reading culture among the youths and also looks to provide a platform for the upcoming writers to interact with their favorite authors,” Felix said.

The minister hoped that such interactions with the eminent writers will inspire them to hone their creative writing skills.

Felix informed that the State Government under the leadership of Chief Minister Pema Khandu is leaving no stones unturned to build a balanced growth in all spheres.

He also said that the Government has been encouraging the growth of young minds by providing scholarships from time to time to foster their love for literature. Felix further encouraged the budding writers and research students to diligently attend the technical sessions and learn from their knowledge and experience.

Chief Secretary Satya Gopal expressed his gratitude for the overwhelming response received from the eminent and emerging writers and poets from all over the country in the one of its own kind festival organized by the department of IPR.

He stressed that there is a dire need to preserve indigenous tribal culture and tradition through literature which is presently limited to oral traditions in the tribal society.

He hoped that the event will provide a platform to the authors and poets of the State to interact with the eminent writers and poets from across the country and provide information about the rich literature of the North East region.

“I am sure that the meaningful deliberations and conversations with the eminent personalities from across the country over the period of three days will provide the much required inspiration and encouragement to our young writers and readers,” he added.

Speaking on the occasion, Padmashree Mamang Dai expressed joy on the initiative of the State government in providing a platform to the budding writers and poets to interact with the renowned ones from the country.

She wished for a permanent platform for such interactions and discourse to hone young brains and encourage development of literature in the state. Dai also dealt in length about the rich culture and tradition of the State.

IPR special secretary Himanshu Gupta, while giving the vote of thanks expressed his gratitude to all the participants for making the event a grand success.

The 1st technical session of Wednesday’s event was chaired by Y D Thongchi with Yater Nyokir, Dr Fameline Marak, T T Lepcha and Karma Choki as the panelists on the topic “Literature from the North East wherein Lepcha, Bhutia, Garo and Arunachalee literature” were discussed in detail.

The 2nd technical session on the topic, “New Earths: Imagining Future Enclosure and Commons” was chaired by Dhruba Hazarika, Damodar Mauzo, Mridula Garg, Ravi Singh and Nilim Kumar The panelists unanimously agreed on the point that language should be left free and allowed to prosper.

The Arunachal Literature Festival is an initiative of the department of IPR to create awareness on importance of literature in and throw light on eminent writers and poets including emerging writers. The event will facilitate interface between local authors and prominent authors. Renowned publishers like Penguin, Lawyers Book Store Guwahati, Zubaan Books and the State’s department of research have also put up book exhibition in the venue.