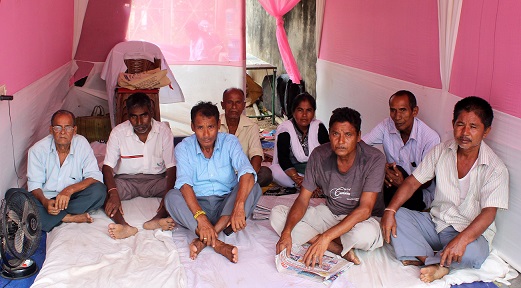 The Red Cross Discharge Employee Union (RCDEU) on Tuesday called off its indefinite hunger strike launched against alleged corruption in the Red Cross Hospital in Guwahati.

It may be mentioned that the union launched the strike on Monday against various anomalies in the hospital.

Talking to Northeast Now over the telephone, union’s general secretary Phatik Das said, “ADC Kathkotia assured us to take necessary and immediate action. He also informed us that an inquiry committee under Deputy Commissioner Virendra Mittal’s leadership has been set up and it would start a probe into the matter from next Monday.”

The protestors submitted a memorandum stating various demands to the ADC, Kathkotia.

Phatik Das told reporters that the union would re-launch the indefinite hunger strike if their demands are not solved.

Das also informed that 20 employees were terminated illegally from service in 2008 by the then general secretary of hospital management society, Renuka Devi Barkataki.

Union president Ramen Barua during their protest on Monday alleged that the union would not let the ‘corrupt’ people to destroy the Red Cross hospital at Chandmari in the city which has a glorious past.