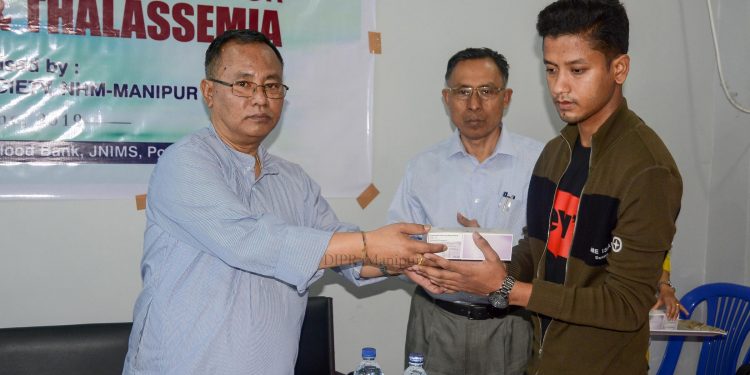 The free treatment initiatives for Hemophilia and Thalassemia were formally launched in Manipur capital Imphal on Monday.

The initiatives were launched under the aegis of State Health Society National Health Mission at the conference hall of Jawaharlal Nehru Institute of Medical Sciences (JNIMS), Blood Bank at Porompat in Imphal on Monday.

Speaking on the occasion, health minister Jayantakumar said that due to advancement in the field of medical sciences, new and complex diseases are being detected and despite the advancements new challenges are still facing in the health sector.

Appealing to the people of the state for a collective effort in fighting life threatening disorders and diseases with positive attitude, the minister said the free treatment initiatives for Hemophilia and Thalassemia are introduced for the first time in the state by National Centre for Disease Control (NCDC).

He said the free treatment is expected to bring a fast solution to control these life threatening disorders.

Experts attending in the day’s ceremony elaborated on the symptoms and causes of haemophilia. It is a rare inherited, sex linked bleeding disorder due to deficiency or missing of clotting factors VIII or IX in the body. Male are sufferers while females are carriers of Hemophilia gene.

On the other hand, Thalassemia is an inherited blood disorder in which the body makes an abnormal form of haemoglobin. The disorder results in excessive destruction of red blood cells, which lead to anaemia.

Free medicines were also distributed to the patients who are suffering from Hemophilia and Thalassemia during the programme.

On the other hand, the District Health Society, Chandel and National Tobacco Control Programme, Chandel observed ‘World no tobacco day’ at DRDA Hall DC complex located at Chandel district headquarters. This year, this day is being observed under the theme ‘Tobacco and Lungs Health’.