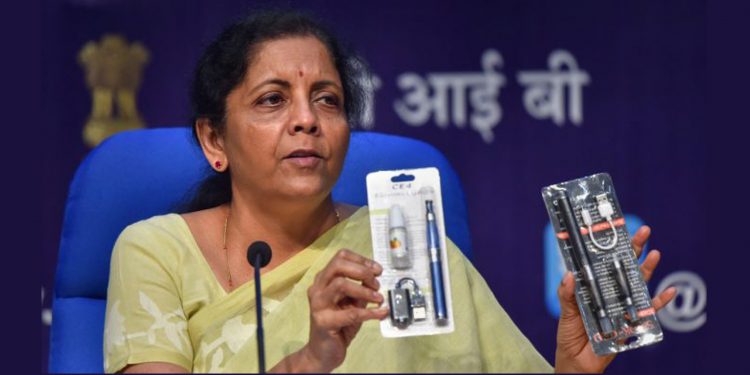 The Union Cabinet on Wednesday has given its approval for banning e-cigarettes.

The government will also be bringing an ordinance in this regard.

Finance minister Nirmala Sitharaman said that the Cabinet has taken the decision to prevent health deterioration of the people using e-cigarettes.

“E-cigarettes were promoted as a way to get people out of their smoking habits but reports have shown that many people are not using it as weaning mechanism but are addicted to it,” added Sitharaman.

The draft ordinance named the Prohibition of e-cigarettes Ordinance, 2019 seeks a ban on the production, import and sale e-cigarettes and similar technologies that encourage tobacco use or adversely impact public health and are hazardous for an active as well as the passive user.

In the draft ordinance, the Health Ministry proposed those who are found to be violating the rules of the ban of e-cigarettes for the first time should face a jail term of one year and a fine of Rs 1 lakh.

However, it also proposed that repeat offenders of the rules should face a jail term of three years and a fine of Rs 5 lakh.

The health ministry had earlier stated that that there is evidence that e-cigarettes are a gateway to tobacco products and induce adolescents and young adults to nicotine use leading to addiction.

Moreover, the Indian Council of Medical Research (ICMR) who sought a complete ban on e-cigarettes also stated that it can cause severe respiratory diseases and affect the cardiovascular and immune system in the human body.