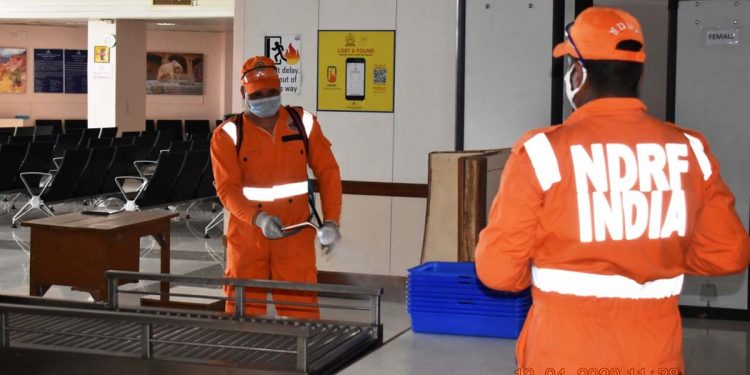 The National Disaster Response Force (NDRF) on Sunday conducted a massive sanitisation drive across North Lakhimpur as a part of fighting the COVID-19 pandemic.

The 12th Battalion of NDRF, based in Duimukh in neighbouring Arunachal Pradesh, conducted the sanitisation drive by spraying disinfectants at important installations in the district headquarters.

The sanitisation operation began from the Lilabari airport where the NDRF personnel sprayed disinfectants both inside and outside the airport.

All the touch points—equipment, door handles, luggage trolleys, railings were cleaned with disinfectants in that operation at the Lilabari airport.

This was followed by sanitisation operation at the office of the Lakhimpur deputy commissioner and other parts of the North Lakhimpur town.

The NDRF personnel also conducted similar sanitization operations at the office premises of the Lakhimpur superintendent of police at North Lakhimpur.

Meanwhile, as street dogs and stray cattle that remained starved as the lockdown brought everything to a standstill a local NGO in North Lakhimpur has come forward to feed them.

Volunteers from different parts of the town have been feeding street dogs and stray cattle in the evening hours.

The feeds include cooked rice and readymade dog food which have been contributed by many benevolent citizens of North Lakhimpur.

Every evening, hundreds of street dogs have been fed for the last ten days and this has been lauded by the public.

Lakhimpur deputy commissioner Dr Jeevan B has informed that the first batch of the medical staff at the special COVID-19 hospital in Panigaon’s Bochagaon moved to a hotel to be quarantined in North Lakhimpur.

A second batch of medical staff has been put on duty in that special hospital.

The DC has asked for reporting of any emergency services during the lockdown in the district if there are any discrepancies.

He said the district administration will take all the needed cares and essential services during the lockdown period.