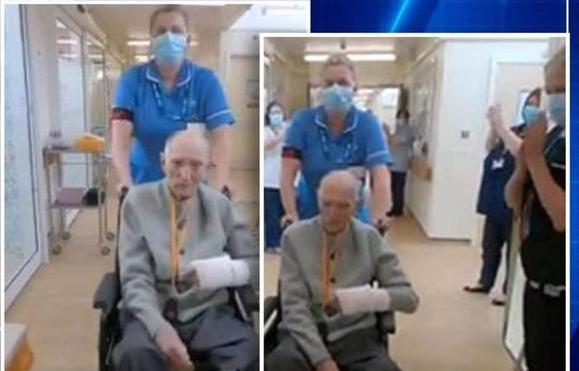 Chambers, who will be 100 in July next, was admitted to Doncaster Royal Infirmary hospital.

A 99-year-old World War II veteran in the United Kingdom has recently left from a hospital after recovering from the deadly COVID-19 which has already claimed thousands of lives across the world.

A video posted by NHS Northeast and Yorkshire which has been going viral shows the elderly man Albert Chambers thanking the nurses of South Yorkshire’s Tickhill Road Hospital for helping him to recover from his illness.

The 46-second video shows Chambers as saying, “Thank you very much. I appreciate everything that you’ve done for me. It could not have been better.”

The video further shows the hospital giving Chambers a ‘guard of honour’ by clapping their hands by maintaining social distancing while he was led out of the hospital.

Chambers, who will be 100 in July next, was admitted to Doncaster Royal Infirmary hospital after, developed symptoms of COVID-19 before testing positive.

He was later admitted to Tickhill Road Hospital and was being treated there before getting discharged on Thursday.

Chambers was a Cold Stream Guard which is a part of the Foot Guards Regiment of the British Army.

Although he was injured in the World War II, he survived the deadly war.