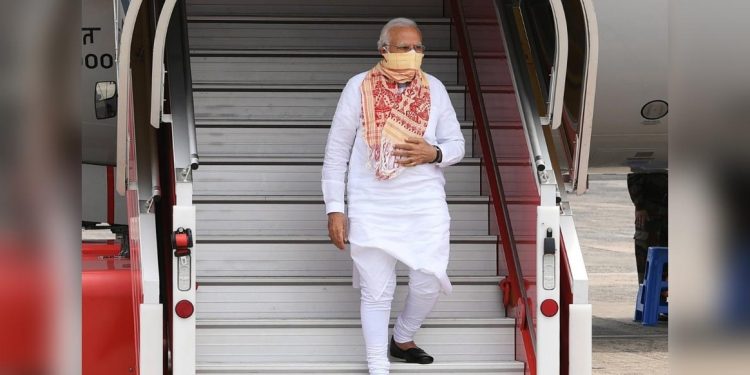 After his visit to Dhekaiajuli in Assam’s Sonitpur district on February 7, 2021, Prime Minister Narendra Modi is all set to visit the state on February 22, 2021.

This will be the third visit to Assam by PM Modi within 30 days since his visit to Sivasagar on January 23, 2021.

Earlier, it was reported that Prime Minister Modi would lay foundation stones for several central government schemes during his visit to Assam on March 2, 2021.

PM Modi is increasing his trip to the state as the Assam Assembly election 2021 is nearing.

“At around 11:30 AM, Prime Minister will dedicate to the nation important projects of the oil & gas sector in an event organized at Silapathar in Dhemaji, Assam,” said a statement issued by Prime Minister’s Office (PMO) on Saturday.

He will also inaugurate and lay the foundation stone for engineering colleges during the event, the PMO said.

According to PMO, Prime Minister Modi will dedicate to the nation the INDMAX Unit at Indian Oil’s Bongaigaon Refinery, Oil India Limited’s Secondary Tank Farm at Madhuban in Dibrugarh and a Gas Compressor Station at Hebeda Village in Tinsukia’s Makum.

The unit will increase the Refinery’s crude processing capacity from 2.35 MMTPA (million metric tonnes per annum) to 2.7 MMTPA.

Its commissioning will also significantly enhance LPG production from 50 TMT (thousand metric tonnes) to 257 TMT and the Motor Spirit (Petrol) production from 210 TMT to 533 TMT.

Oil India Limited’s Secondary Tank Farm has been built for safe storage of about 40,000 Kilo Litres of crude oil, and the separation of formation water from wet crude oil.

The Rs 490 crore project will also have a Dehydration unit with an operating capacity of 10,000 Kilo Litres per day.

The Gas Compressor Station at Makum in Tinsukia will increase the nation’s crude oil production capacity by nearly 16500 Metric Tonne per annum.

The Dhemaji Engineering College has been built on 276 bighas of land at a cost of about Rs 45 crore.

It is the seventh government engineering college in the state and will offer B.Tech courses in Civil, Mechanical and Computer Science.

“The Sualkuchi Engineering College, whose foundation stone will be laid, will be built on 116 bighas of land at a cost of about Rs 55 crore,” the PMO further said.