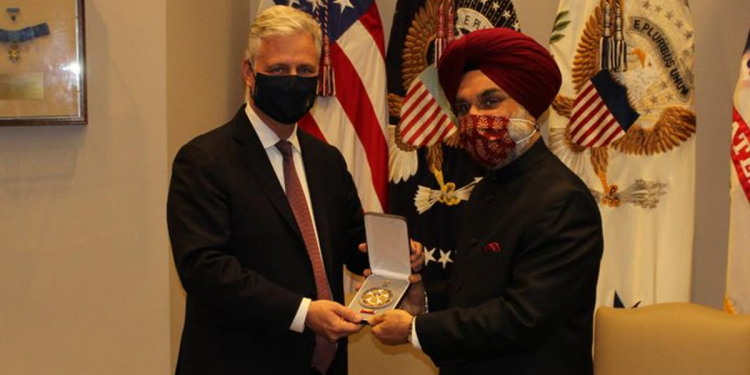 Taranjit Singh Sandhu, India's Ambassador to the US, accepted the award on behalf of Prime Minister Modi.

Donald Trump presented this prestigious award to PM Narendra Modi for his leadership in “elevating strategic partnership of the two countries”.

Taranjit Singh Sandhu, India’s Ambassador to the US, accepted the award on behalf of Prime Minister Modi.

US National Security Advisor (NSA) Robert O’Brien presented the award on behalf of Donald Trump at the White House.

“On behalf of President @realDonaldTrump, I presented the Legion of Merit to @ScottMorrisonMP, @narendramodi, and @AbeShinzo, through Ambassadors @A_Sinodinos, Sugiyama @JapanEmbDC, and @SandhuTaranjitS, who accepted the decorations.” –NSA Robert C. O’Brien pic.twitter.com/hmgiQrY5RP

Notably, all the three Prime Ministers presented ‘Legion of Merit’ happen to be PMs and ex-PM of the recently constituted ‘Quad’.

Quad – comprising Japan, India, Australia and the United States (US) – was given a final shape in 2017, to the long-pending proposal of setting up Quadrilateral coalition to counter China’s aggressive behaviour in the Indo-Pacific region.

Meanwhile, the Ministry of External Affairs has stated that the award is in recognition of the “PM’s steadfast leadership and vision for India’s emergence as a global power, and exemplary contribution made by him for the advancement of India-United States strategic partnership and promoting global peace and prosperity”.