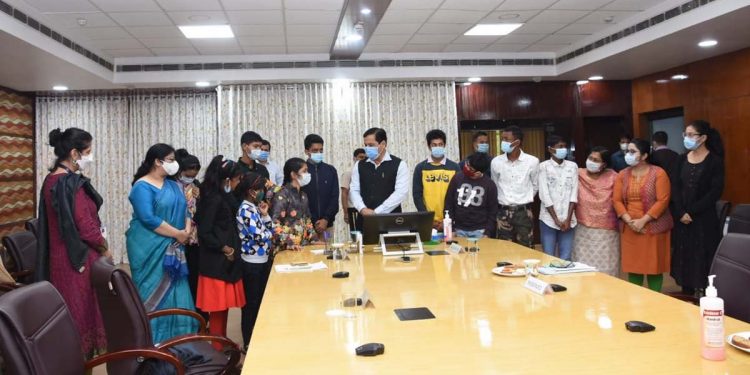 A delegation comprising UNICEF India officials and children called on Assam chief minister Sarbananda Sonowal at his residence in Guwahati and the children presented him a Children’s Manifesto.

The UNICEF Assam chief expressed gratitude towards chief minister Sonowal for listening to the recommendations of the manifesto.

“Much gratitude to the @CMOfficeAssam for listening to the recommendations of the #manifesto for Assam by children. We look forward to working closely with your office to give children of Assam a better future @UNICEFIndia,” tweeted Dr Madhulika Jonathan, the chief of UNICEF Assam.

Much gratitude to the @CMOfficeAssam for listening to the recommendations of the #manifesto for Assam by children. We look forward to working closely with your office to give children of Assam a better future @UNICEFIndia https://t.co/XcmaXwD7Vo

While sharing her sufferings due to gender discrimination which still prevails in the society, 12-year-old Tutsi Ramchiary from Baska told the Assam CM that her father had dumped her after her birth.

He had blamed her for her mother’s death.

She questioned if she would have been a boy, would her father desert her.

Tutsi was a part of the nine other children who called on the Assam CM.

She also requested the CM to work on gender discrimination.

Eleven-year-old Rimjihim Saikia, a cerebral palsy patient, who has also gone through tough times due to discrimination for her disease, urged the CM to open schools in every district where children like her can learn dancing and acting and drawing.

Chief minister Sonowal said for the protection of children and to secure their future against exploitation, parents, teachers and all other stakeholders together should work to advocate and promote their rights.

Interacting with the delegation, Sonowal exhorted the need of having dialogues and translating them into actions for building a better world for children where they will be free from violence and all its manifestations.

Talking to the children, Sonowal asked them to imbibe healthy habits, practise health and hygiene and respect the elders.

Stating that securing the future of the children is the special responsibility of the government, Sonowal said efforts have been made to see that each and every child is protected from violence and they have access to affordable health care and nutritious food in the state.

Replying to questions from the children, chief minister Sonowal said he would take initiative to provide quality and affordable education to all children especially to those in vulnerable circumstances.

He also said steps would also be taken for providing scholarships to the divyang (specially abled) students.

Sonowal presented signed copies of Prime Minister Narendra Modi’s book ‘Exam warriors’ to the children and wished them all luck in their future.