Tiger: Not really out of danger 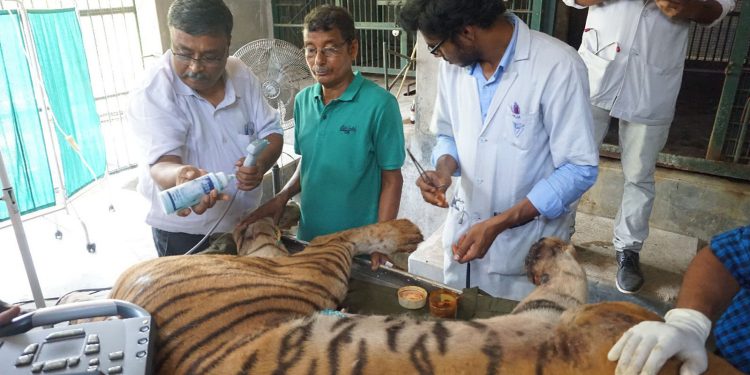 Julie, which has been undergoing treatment in Assam State Zoo and Botanical Garden at Guwahati.

As I soaked my feet in the potash water and tried to enter the enclosure, an intimidating sound made me standstill. ‘Julie!’ – the zoo attendant, who was accompanying me, tried to calm that agonizing voice behind the iron grill. The sound did calm down the frail tigress and ‘Julie’ tried to rest her head on the floor of the cage. It was certainly not a situation to cherish, specially watching an iconic wild feline trying to cope with a captive life!

“Julie has been housed here in the State zoo for more than three months now,” said the attendant. She was brought from the Orang National Park for an infection in the eyes. But poor Julie had lost her eyesight! “There have been several reports of tiger sightings near human habitation in the fringe areas of the Orang National Park. Initially, it was thought that the tiger must have strayed out after being chased by another tiger from its territory. But when the tiger was found inside a village, a team was sent to tranquilize it. The veterinarians from Wildlife Trust of India (WTI) and the State zoo looking at the complications initially suspected the female Royal Bengal to be pregnant and brought her to the Zoo for treatment. However, after examination it was found that it was not pregnancy but the feline could not prey due to loss of eyesight,” said Tejas Mariswamy, IFS and the Divisional Forest Officer of the Assam State Zoo and Botanical Garden in Guwahati.

Although the zoo veterinarians were not sure what caused the infection that gradually led to the loss of eyesight in the tigress, they were sure that if not completely, but the tigress may recover partially after treatment.

Julie’s case has been first of its kind now been treated in the Assam State Zoo. However, another veterinarian said on conditions of anonymity that it has been a straight case of poisoning. The zoo authorities also did not deny such an angle.

Electrocution and poisoning of the big cats have become common across tiger habitats in India. Last November, the authorities of the Orang National Park had to face wrath of inhabitants of some six villages in the fringe after a tigress codenamed F-03, eluded every attempt of its capture. The tigress, aged about 12 years killed at least 60 animals. A local student leader, Rajen Boro said that they were afraid the tigress might be poisoned anytime by the angry villagers. “Two years ago a tigress was poisoned after it strayed from Orang and killed their animals,” he added.

The Rajiv Gandhi Orang National Park — a satellite area of Kaziranga National Park in Northeast India is the smallest national park in Assam, with a size of just about 79 square kilometre and an estimated tiger population of 24. It became the 49th Tiger Reserve of the country. I was one of the members of the State Board of Wildlife in 2014 when the proposal for declaring Orang as a tiger reserve with 79.28 sq km of core area came in. I remember, this was the only proposal amidst a host of others, on which members were unanimous over an instant approval. In 2015, the National Tiger Conservation Authority gave its nod to declaring the park a tiger reserve. From the east of Kaziranga to the west of Orang, over 1,100 square kilometre area has thus become the single largest protected area with a tiger habitation in Assam. However, like most of the tiger reserves in the country – Orang, too, is not free from the dual menace of poaching and encroachment. Just days after it was declared a tiger reserve on February 24, 2016, officials at Orang stumbled upon an M16 rifle confirming suspicions that poachers are now using more sophisticated weapons. Poaching of a tiger that very year created widespread concern.

Last year, the arrest of a forest worker along with three poachers from Orang National Park and the seizure of tiger parts from their possession brought to the fore the precarious position of the national animal inside the newly created reserve. While the recent estimates of wild tiger populations showed a positive trend in more than 100 years, in reality the tiger is not out of danger. An average of 11 tigers died every month in the first half of 2017 in India while tiger deaths related to poaching reached an all time high in the year 2016. Experts say these reported figures might represent only a fraction of actual mortality rate.

Of the 122 tiger deaths reported in 2016, a total of 22 were presumed deaths on the basis of body parts seized. The year saw the death of three tigers in Assam within a span of just 30 days. The incidents took place in Orang, Manas and the upper Assam district of Jorhat where an irate mob of some hundreds of villagers killed a full grown male tiger in broad daylight, in front of forest and police personnel, after the animal injured two people on November 24. The villagers also chopped away the tail and paws of the ill-fated animal while police and forest personnel watched as mute spectators.

Nearly 93 per cent of the total tigers in India are concentrated in the 12 states of Arunachal Pradesh, Assam, West Bengal, Bihar, Odissa, Uttar Pradesh, Madhya Pradesh, Rajasthan, Maharashtra, Andhra Pradesh, Tamil Nadu and Karnataka. The Union Environment Ministry estimated a whopping Rs 165 crore for 43 reserves for the protection of the big cat on an average. That number increased over the years. In Assam, after the Kaziranga National Park, the Manas National Park and Pakke-Nameri in the Assam-Arunachal border, the Rajiv Gandhi Orang National Park — a satellite area of Kaziranga NP was declared a tiger reserve taking the number of tiger reserves to 49 in the country. Poaching of the tiger for use of its organs in traditional medicines, threatened the complete extermination of this magnificent feline. According to current estimates, their number is not more than a paltry 4,000 – half of them roaming in the protected wilderness of India.

Menace of encroachment in tiger habitats

In July, 2017 six persons were arrested in connection of killing of a Royal Bengal Tiger in the Manas National Park and Tiger Reserve. Forest officials seized a tiger skin–that belonged to an adult male —along with 154 pieces of tiger bones from their possession after a raid in two different villages adjacent to the Park. The tiger had been gunned down three months before, confessed the criminals. Nine months before that, in October, 2016 startling revelation came to the fore when a surrendered militant was arrested with a tiger skin from the Manas National Park with three others.

The kingpin, Bwlwgwra Basumatary — a surrendered ultra of the National Democratic Front of Bodoland who was also wanted in an arms snatching case from forest staff– revealed during interrogation that the skin belonged to a tiger that was poisoned by villagers in the Betbari area under the Bhuyanpara range of the Park. While this revelation took the lid off of a larger network dealing in arms and wildlife parts, the poisoning of the tiger points to another vital threat to conservation—habitat destruction as a result of encroachment. “All the four held are encroachers,” said C R Bhobra, a retired forest official, investigating the incident.

Encroachment has crippled the Manas National Park—a World Heritage Site, a biosphere reserve, an elephant project and also a tiger reserve with a population of some 30 tigers. About 16 sq km area of the Bhuyapara range, where the incident took place, has been under encroachment.

Organized encroachment has threatened to wipe away the Manas Resesrve Forest, to the west of the newly created first addition of Manas National Park. It has been alleged by local environment groups that not less than an acre of the forest land has been cleared each day. Encroachment has been intensified in the Reserve Forest since the last one year. Destruction of this important forest patch between the river Aie and the river Bhur has reached such an alarming proportion that it has been feared that the whole Reserve Forest might vanish by next year unless the local administration curb this menace with strong hands. About 53 villages sprang up inside the Manas National Park over the last 20 years. Along with encroachment, illegal logging and poaching continue in the National Park. Conservation goals are compromised when there are sanctions on encroachment in tiger reserves.

When it comes to tiger conservation, apart from the threats of habitat destruction and poaching, conflict between tiger and people had posed a bigger challenge. Human habitations deplete prey base for the tiger– experts had warned and suggested that conflict cannot be resolved unless wild animals have sufficient protected space so that they do not have a reason to get too close to human habitations. In India, approximately 45 mn people live in forest-fringe areas. To ensure safety of the tiger, it is therefore absolutely necessary that community education and engagement get top priority.

Mubina Akhtar is an environmental journalist and wildlife activist. She can be reached at: [email protected]