Play on Sardar Patel enthralls all in Arunachal Pradesh

The play was staged by Viewfinder theatre group from Gujarat 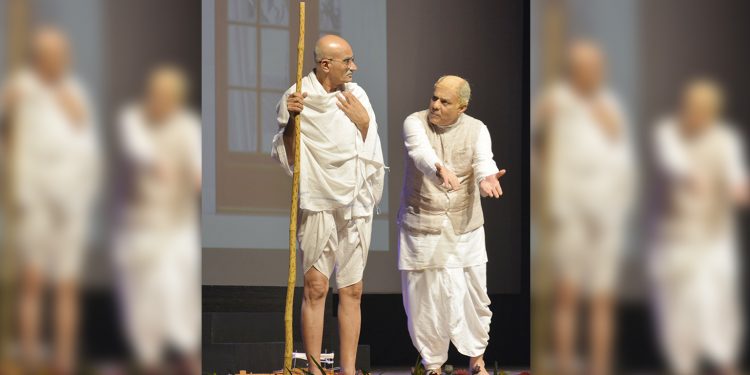 A scene from the play on Sardar Vallabh Bhai Patel. Image: Northeast Now

The play was staged at the Dorjee Khandu State Convention Hall in Itanagar on Thursday by Viewfinder theatre group from Gujarat.

The theatre group showcased 21 selected important incidences of Sardar Patel’s life and the play was applauded by the audience.

The programme was organised as part of 73rd Independence Day celebrations, with active cooperation of the Gujarat government.

The play was aimed to promote aesthetic music, song, dance and drama to reinforce patriotism, national integration and spirit of national unity and integrity.

Speaking on the occasion, the Governor recalled the contributions of Sardar Patel, who united 562 princely states, including Jammu and Kashmir, which was the most difficult aspect of nationhood after independence.

“With constitutional provisions like Articles 370 and 35A, although J&K was merged with Indian Union, these hindered the development in Jammu and Kashmir even after independence,” he said.

“Now these provisions are abrogated and the people of Jammu and Kashmir will be immensely benefited,” the Governor further added.

Sharing his experience of pre-independence days under the British rule as a child, Mishra urged the people to raise the spirit and values of independence with transparency, accountability and discipline.

He said that the present generation and future must realise the values of our independence and preserve it.

Mishra commended the Khandu government and the state Cabinet for the developmental initiatives in the state like ‘Sarkar Aap Ke Dwar’, etc.